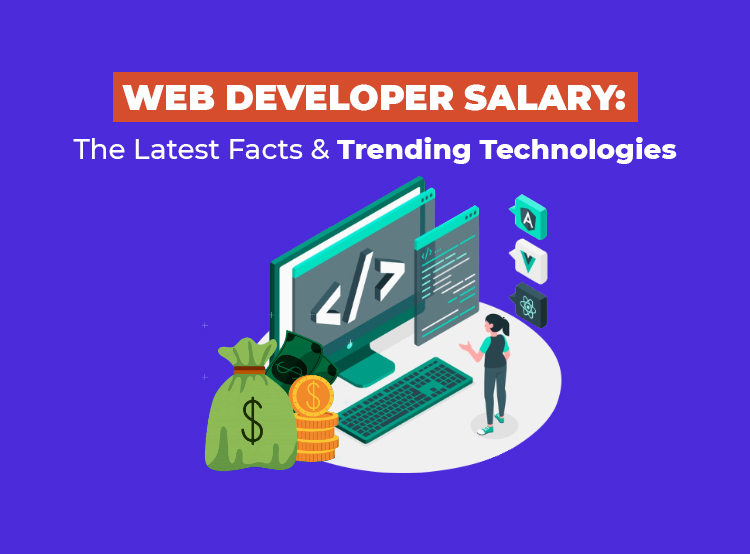 If you’re looking for a career in web development, you will face many burning questions. How long will it take to learn all the essential skills? What is the average web developer salary? What does a typical day of a web developer look like?

Are Web Developers In Higher Demand?

Of the trendy and rapidly growing businesses on the planet, it’s a perfect time to be a developer of any type. And regardless of the growth of this job industry, salaries continue to rise. There is no oversaturation of web developers these days. Demand for programmers is booming, but it can be a very competitive industry.

You will probably have to pick up numerous languages and a wide range of skills to find the best jobs in the well-reputed companies. Keeping up with the technology trends, frameworks, and languages are critical to staying more relevant.

According to the United States Department of Labor, web developer jobs are expected to grow 13% from 2018-2028.

It is the higher number because typical job growth across all industries is just 5 percent. Information Technology (IT), generally speaking, is a booming industry, with general computer occupations rising at 12 percent.

A web developer job requires a particular skill set to get a job in any well-reputed organization. Proficiency with computers, ability to focus for hours at a time, and learning of several unique languages, all take some time and training to grow, so they have high demand.

People are spending more and more time online, and companies follow them, thereby adopting digital marketing, primarily social media marketing techniques. Nowadays, every business needs to have a website, and a wide range of individuals are trying to start an online company. All these people need developers to develop functional websites from scratch.

According to Statista, over half the global population uses the internet, and web developers are needed to develop and personalize online shops, blogs, newspapers, gaming, personal and informational websites that keep people hooked online.

There is no shortage of work in case you want to start your career as a web developer. This blog will help you understand the range of salaries you can expect to earn, whether you are a frontend, backend, Android, or full-stack developer.

What are the Required Things to Become a Web Developer?

There are various types of web programmers, and each job role required a specific set of skills. You also have multiple options for your work environment. Whether or not you would like to be a freelance web developer in a company space or a large office environment, you’ll be able to find the right spot for you. Many developers believe freelancing is better because of its flexibility.

Around 46% of web development vacancies will Request bachelor’s degree in computer science or related fields. Many jobs offer only require the right amount of experience instead of mentioning certificates and degrees. So, it is highly recommended to focus on establishing your portfolio because it is essential to have higher certifications. Most self-taught developers got their jobs with a fantastic portfolio and hands-on experience of particular languages and frameworks.

“Web developer” is an umbrella term used to encompass a wide variety of skill sets, including, so if you are new to the development field, then it is the right time to choose a more appropriate one.

Generally, there are three main categories of web developers: frontend, backend, and full-stack. There are also several different subtypes.

Frontend designer/developer work on the Client-side portion of the website, design user interfaces, and make a website look and act up to specification. You will get help from web designers or perhaps even do some design work by using HTML, CSS, JavaScript, and their frameworks.

In short, backend development is necessary to make a website functional, work on server-side tasks, and ensure that everything is working smoothly behind the scenes. For a backend developer, it is mandatory to have a good understanding of databases and complex systems. Many languages are available, including PHP, Python, Java, Ruby, and different frameworks like Ruby on Rails.

The full stack developer is responsible for both Frontend and backend functions and has a good understanding of both. It is mandatory to pick up many skills and get prepared to adapt to anything.

These web developers need to know website responsiveness while designing the websites for mobile-specific visitors. Moreover, this can overlap with application development and design.

As you know, WordPress is the most widely used CMS (Content Management System), which is based on PHP. The WordPress developers need to be proficient in PHP, HTML, CSS, JavaScript, and a good understanding of WordPress’ backend.

Web security developers are also known as security software developers or cybersecurity developers. It is also a trending field because cyber-attacks are increasing day by day, and stealing confidential information and destroy the brand’s reputation. They work to secure websites, fix any hacks that may happen, and study common attack vectors by utilizing white hat hacking techniques to acquire insight into how websites get hacked.

Before getting into the information, you have been waiting for – the web developer salary – let’s set the appropriate way to check it.

The information given below is accumulated from job websites that consider different resources linked to their internal data. I will try to mention several data sources, so let’s dive into web development salaries!

When I was writing this blog, Glassdoor’s estimate lists a similar number, $68,524 / year. Even on the lower end of the spectrum, you could find $44k/year, while the experienced web developers earn $111k yearly.

You can find even more interesting statistics on Payscale, where the salary outlook is slightly above $59k/year, and the salary go up according to the years of experience.

Let’s talk about the stats provided by another website named Indeed; the web developer salary is $78k per year.

The salary range varies across the different sources, but the average pay ranges from 60k to 80k per year. This is relatively generous to get a job by completing an associate’s degree or less.

As mentioned before, the web development field is highly technical. The average salary is not the end of the story, so choose a more appropriate one and start learning today.

The salary amount depends on what niche you pursue and the language(s) you are proficient at. Generally, the frontend developers earn the lowest amount compared to the other specializations of developers, while the full stack developers can expect to make more than average. So, the numbers are given below:

Indeed: ~111k/year at the higher end of the spectrum

So, on average, a frontend developer can expect a salary of $70-80k and likely more once he got to experience.

Indeed: ~128k/year at the higher end of the spectrum

So, on average, a backend developer can expect a salary of around $100k per year and get handsome packages as per the experience.

Indeed: ~112k/year at the higher end of the spectrum

This indicates that full-stack developers are getting paid a little better. Still, as per the education and experience, you might not get as much as you expect with the expertise necessary to do two people’s jobs.

On average, we could find a 94.4k/year salary as a full-stack programmer/developer, although positioning it as the highest-paid job role out of the three with an average of 124K.

Since you are searching for new opportunities, you might encounter senior or junior web programmer posts. Mostly, these classifications are based on years of expertise. Moreover, an experienced or senior programmer can handle multiple junior programmers as a team lead.

You may require a minimum of 5 years of experience and maybe a bachelor’s degree to qualify for senior positions. On the other hand, the junior posts only require a partner’s degree and/or a couple of years of personal coding experience.

Indeed: ~66k/year at the higher end of the spectrum

On average, the junior web developer can earn up to 56k/year and get a senior-level job with a few years of hands-on experience.

Indeed: ~107k/year at the higher end of the spectrum

On average, the senior web developer can earn up to 94k/year and may vary based on the company.

As said earlier, overall, web developers have an average salary, which ranges from 60k-80k/year or above-average pays. In short, those developers who build different software that runs on your computers — tend to make better money than web developers.

ZipRecruiter lists the most generous estimate for software programmers close to $86.5k/year excluding outliers; the average range begins at $33.5k/year and ends at $138k.

On the other hand, PayScale estimates $72k/year and quite an extensive range of $50k-$105k for software programmers.

Glassdoor proposes $76.5k/year and a range from $58k-107k with data collected from hundreds of millions of salaries.

Based on figures from sources given above, you could earn a salary of nearly $86k/year as a software programmer.

“Mobile programmer” is a difficult job because he can make a site responsive alongside other web development duties and development of Android and iOS apps. So, if you want to get a detailed information then here you can find Mobile Developer vs. Web Developer. The Android Developers Salary can range from $60k/year (PayScale) or $69k/year (Glassdoor) to $110.6k/year (ZipRecruiter).

Those mobile developers who are responsible for developing apps and software, they can earn $74k/year (PayScale), $96k/year (Glassdoor), or even up to $123k/year (Indeed).

Imagine if You Choose the path of freelance web development, then the traditional office jobs are not for you, you might want to consider forging your way into the business. There are no requirements to begin with: there is no need for any college degree or years of experience, just the skillset, some understanding of project management, and self-marketing skills.

Freelancing is also a fantastic way to shift into salaried Jobs afterward if the perfect opportunity presents itself.

So, if you are thinking, how much can freelance web developers expect to earn?

It can be hard to get a steady flow of tasks once you’re well established; depending on the information available, you can expect from $72k to $75k as your annual income.

Creating a brand for yourself can be quite lucrative, but it is not suitable for all. It requires higher commitment level and a multi-faceted skillset that, even though it could be improved as you go.

What programming languages you know will play a big part in the overall income, so here’s a quick breakdown of popular web development Languages and how much they’re worth from lowest to highest (according to PayScale):

You may also consider Stack Overflow’s Highest-salary languages from 2019, although not all of these are suitable for web development:

There is so much work out there for website developers because the industry is getting bigger and bigger every day, and customer needs are more specific than ever. The data gathered here should provide you a clear view of what to expect as a web developer’s salary, based on various criteria like expertise, language, and market.

Having a median pay of $73,760 per year, web development is a well-paying job no matter what specialization or combination you choose. Of course, the web and programming languages you know will play a vital role in the overall salary.