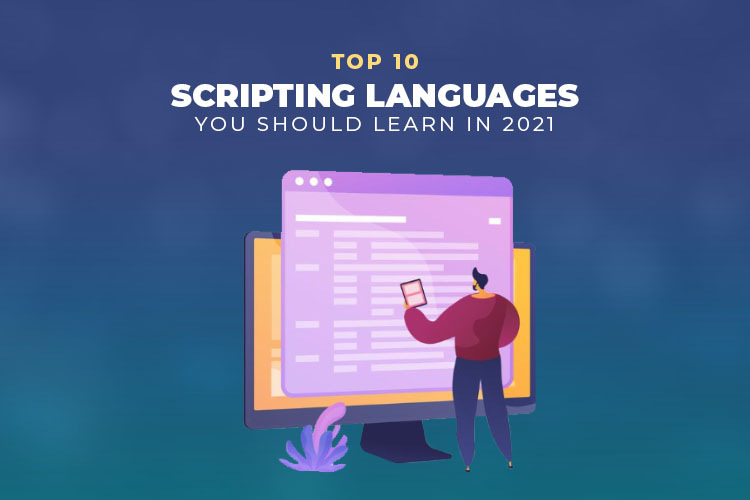 Scripting languages are used to write different scripts that contain several commands and are interpreted one by one at the runtime instead of compiling before running. Generally, Scripts are associated with web development and give instructions to the server, web browser, or standalone application to make dynamic web applications.

JavaScript is Object Oriented Programming (OOP) language in which objects are reused as prototypes, and it has first-class functions (treated as variables). It is known as the best implementation of ECMA-262 Standard of scripting languages and uses the same syntax as ECMAScript; therefore, it doesn’t have a standalone specification.

It is not limited to frontend web development; it can be used in runtime and non-browser environments. Moreover, shells of some NoSQL and relational database management systems such as MongoDB and aforementioned use it as a scripting language.

Press F12 and write the given code in your browser’s JavaScript Console to check the output of the given example in which we are adding numbers from 1 to 6 together:

PHP (an acronym for “PHP: Hypertext Preprocessor”) is an open-source and most popular scripting language used in backend web development. However, PHP’s original acronym is “Personal Home Page” because it was created to add dynamic functionalities to the static web pages.

It is also used by different Content Management Systems such as WordPress, Joomla, Drupal, and a complete PHP Framework list including Laravel, Symfony, and CodeIgniter.

With the help of the given code, I will create a numeric type Array with five elements, loop through them, multiples each item by two, and unsets the $value variable when the loop is completed.

Perl is one of the oldest general-purpose scripting languages created as a UNIX scripting language in 1987 for report processing. It became popular when programmers began to use it for CGI (Common Gateway Interface).

Nowadays, it is not the first choice of backend developers, but it is still used by Amazon, IMDB, BBC iPlayer, Booking.com, and others. Perl has several web development frameworks such as Mojolicious, Catalyst, Dancer, and Jiffy.

I am going to define square() subroutine that will calculate the square of any given number, then pass the value 4 as an argument, runs the code and save the output into the $sqr variable:

Bash (the acronym stands for ‘Bourne Again SHell) is the name of both scripting language and command-line interpreter (Shell) for the GNU Operating system. You have the facility to run in both scripting mode (run a set of commands at once) and interactive mode (execute a single command at any particular time and wait for the machine’s reply).

You can use Bash to execute multiple commands to perform different actions related to the Operating system, such as customization and automation of administrative tasks. Bash is the default shell for most of the UNIX-based operating systems.

Bash has simple and descriptive syntax, the same as most CLI scripting languages. In the following example, the given commands select a file from the current folder and display a message containing the name and index of the file:

All windows users are familiar with this command-line shell and scripting language that is made for Windows operating systems. Microsoft has moved it from .NET Framework to .NET Core which is used to create cross-platform applications. In .NET Framework, you were limited to the Windows OS, but with the help of the .NET core, you can easily create different applications for Windows, Linux, and macOS. Here is quick overview and difference between .NET and .NET core.

PowerShell helps in task automation because it accepts and returns .NET objects instead of plain text. You can easily use it on Windows, Linux, macOS, and ARM devices such as Multimedia players, smart wearables, and consumer electronic devices. With the help of this PowerShell, you can easily perform administration, configuration, and automation tasks using different modules and scripts provided by Microsoft.

The following command is used to create a backup of boot.ini and saves it to the boot.bak file:

Python is the third most popular programming language in 2021 because you have to type less and do more as compared to other languages. It is also one of the best open-source projects and managed by Python Software Foundation. Python comes with a collection of extensive libraries and supports structured, functional, and Object-Oriented Programming (OOP).

Remember, there is no need to use curly brackets and semicolons in Python so that you can read and write your code with ease. The given code will loop through integers between 0 and 6 and prints them out:

Ruby is a general-purpose, open-source scripting language that supports object-oriented design, procedural and functional programming. It has easier syntax and allows you to write clean and logical code with the help of object-oriented programming concepts. It is used for creating backend logics of web development and power some web application frameworks such as Ruby on Rails.

It also supports competing runtime environments such as JRuby (which allows us to run Ruby on the JVM (Java Virtual Machine)), mruby (a lightweight implementation of Ruby that can be embedded within applications), TruffleRuby (Oracle’s Ruby interpreter built on GraalVM) and others. Many popular applications and websites are built with Ruby on Rails, such as GitHub and Shopify.

Ruby syntax is similar to Python, and the given code snippet defines the karaokeSong class as a sub-class of song class:

R is not limited to scripting but is used in a software environment which is mainly used for statistical computing, graphical display, and data analysis. It is an open-source and free language that uses different statistical techniques such as time series analysis, clustering, classical statistical tests, linear and non-linear modeling, etc.

R Software environment is also an open-source and cross-platform that allows accessing statistical functionality using some other scripting languages such as Python and Perl. However, R is not limited to its default environment, so you can use it in other environments such as pqR (Pretty Quick R) and Renjin (R Implementation on top of JVM (Java Virtual Machine)).

I am writing R program to check whether an integer input number entered by the user is prime or not with the help of control statements:

VBA (Visual Basic for Applications) is specially created for Microsoft Windows Applications to automate their repetitive tasks, add new functionalities, and handle the interaction with the end-users of documents. As you know, Microsoft Office applications are based on GUI (Graphical User Interface), so you can attach VBA scripts to keyboard shortcuts, macros OLE events, or menu buttons.

Visual Basic for Applications scripting language is used in most Microsoft Office applications, respectively Access, Excel, Outlook, PowerPoint, Project, Office for Mac, Publisher, Visio, and Word. Remember, it is not limited to the Microsoft applications, but it is also used in other apps such as CorelDRAW and AutoCAD.

In this example, I am going to use GetCertificateDetail() of the SignatureInfo object to get the expiration date of a digital certificate:

GML (Game Maker Language) is a domain-specific scripting language that belongs to GameMaker Studio 2, a cross-platform game engine mainly used for game development. It is owned by YoYo games and allows us to call custom scripts from game objects.

GameMaker Studio 2 also has a visual scripting tool named Drag and Drop (DnD) which supports GML scripts so that you can mix the scripts of both. It is not free; you have to buy it for your desired operating system (Windows, macOS, Ubunto). It supports HTML5 web games, Universal Windows Platform, desktop games, mobile games, Xbox One, etc. For example, Blackhole, Deltarune, 10 Second Ninja X, and others.

There is no doubt that scripting languages have different variations, syntaxes, and implementations as per specific needs, such as creating video games, automating system administration tasks and dynamic websites. If you are confused about which scripting language is perfect, you have to specify your requirements and then check your chosen language’s popularity before learning.

If you enjoyed this article, then you will love Temok’s Web hosting plans. Our managed Cloud web hosting powered infrastructure focuses on auto-scaling, performance, and security. Let us show you the Temok difference! Check out our plans