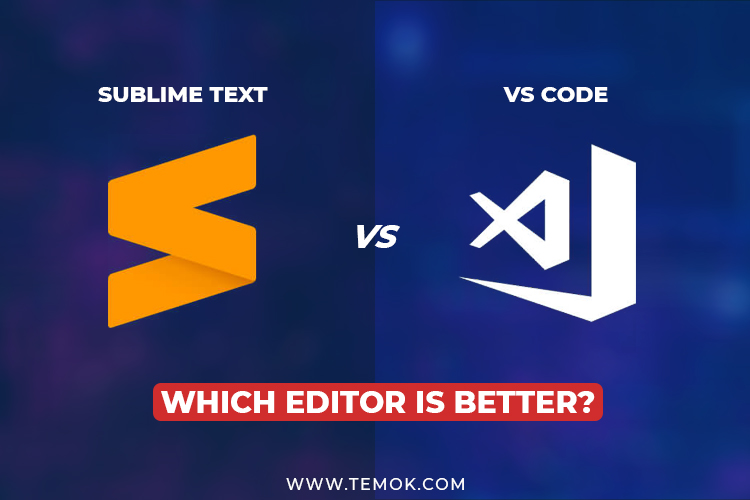 Professional developers usually have strong opinions about source code editors. The code editor you are using has a huge impact on your overall development experience, so choosing the most suitable code editor is a big deal for developers. However, when it comes to choosing between a wide range of code editors, Sublime and VSCode are the most recommended and popular ones.

Now the question here is, among these two top code editors, which one is better and should be used by developers. Well, there is no straightforward answer to the question because many factors need to be kept in mind while comparing Sublime Text vs VSCode editors.

In this blog post, there will be a detailed comparison between both VSCode and Sublime Text editor. If you are a developer confused between these two options, you better read this article till the end to figure out your ideal choice.

Visual studio code is a powerful source code editor that operates on the desktop for Windows, Linux, and macOS. It is a lightweight system that supports Node js, TypeScript, and Javascript. It also provides a variety of extensions for Python, PHP, Java, C++, C#, and Go languages.

VSCode also has IntelliSense, which is a code completion aid. It supports variables, methods, graphical debugging, imported modules, multi-cursor editing, parameters hinds, and a lot of other features that make the coding easier and faster for developers. This code editor has gained popularity in a very short span of time and managed to build a good reputation among developers.

It is an older code editor as compared to VScode. Sublime Text was developed by a former employee of Google somewhere around 2007. This code editor can be run on Windows, Linux, and macOS. It is a sophisticated editor used for code, prose, and markup. It is a cross-platform editor, but you must keep in mind that it is not free; you have to pay a license fee. Although it offers a free trial to its users, the license fee is 80$, which is way more than VScode.

Sublime Text offers customization options for developers. Being one of the fastest and most lightweight code editors allows the developers to maximize their performance and achieve better outputs. It can be a smart choice for developers who are looking for stability and speed.

Every developer has their own preferences and needs when it comes to choosing a source code editor. However, there are some important points that all developers should know to choose the ideal options based on their needs. Following are some major points that highlight the differences between both VSCode vs Sublime Text editors.

The best parameter to measure the performance of any code editor would be speed, and no one can really beat Sublime Text on this. VSCode, on the other hand, is also a great option, but when it comes to speed, it faces many issues. As VSCode uses an electron framework that causes the application to slow down when started.

So, when you are starting the app, you might need to wait for some extra seconds because of the startup load. However, not most developers care about it, or maybe they are used to it. So. If you are someone who doesn’t really bother about those few seconds of downtime, VScode is generally a fast code editor.

Sublime Text is more suitable for managing large-scale development projects because of its ability to handle more load without compromising on speed. When it comes to scalability, it is a more reliable option.

Both Sublime and VSCode help you perform quick searches. Using simple commands, you can easily find the methods and names in your code. In the case of VSCode, you can only work on a few languages.

More customization means more creativity. Developers want customization to create a personalized development environment that allows them to be creative. Extensions, themes, and plugins provided by a code editor lead to innovations, and developers can create a unique dev setting to fulfill their needs.

Both VSCode and Sublime provide their users a wide range of customizations, options, and extensions. It would not be possible to list all of them in this article, so below, we have mentioned some major extensions and plugins offered by these source code editors.

Both VSCode and Sublime Text editor provide enough customization options that allow the developers to easily modify their editors. All you have to do is conduct thorough research, and you will end up finding everything you want. However, not all extensions and plugins are equal. So, sometimes you like one customization option in one editor and want another plugin from another editor. Both editors have their own plus and minuses when it comes to customization, so it is impossible to choose a clear winner.

Gone are the times when you had to break down your code to fix an error. It is a very time-consuming and troublesome job to do manual debugging. To eliminate errors and improve the final outcomes, you have to manually go through the lines of code. That was crazy and also not a practical way of debugging the code.

Fortunately, we have VSCode editors that help you detect errors in your code using debugging features. There is no need at all to go through each line of code. All you have to do is press F5 to run the entire code, and you can also debug the code through the debug menu. Moreover, VSCode automatically deduces minor code errors, and you can easily resolve them.

Sublime doesn’t include a built-in debugger; however, it offers a lot of plugins that come with smart debugging features. Using these plugins, it becomes easier for developers to detect and eliminate errors from the code. You can also install an Xdebug Helper extension on your chrome and start debugging.

VSCode vs Sublime Text | Which one is Better?

Well, there are multiple factors involved that can help you choose the ideal option for you. VSCode is a user-friendly editor that is ideal for almost all types of developers because of its flexibility and versatility. For the small-scale development task, it is more handy and convenient to use. However, advanced development options are also available in VSCode for someone who does serious programming.

On the flip side, Sublime Text editor is a fast and high-performing editor that is an ideal option for large-scale projects. Experienced developers who understand the keyword shortcuts and functionalities can work more comfortably with this editor. As Sublime code editor doesn’t have a built-in debugging option available, you have to install plugins; it can be a matter of concern for many developers.

In this article, we have compared the performance, customization, and debugging capabilities of both Sublime Text vs VSCode editors. The main purpose of doing this comparative analysis is to help new developers understand the intricacies of both editors and choose the one that better fulfills their needs.

Do let us know about your favorite code editor and why you would recommend it.