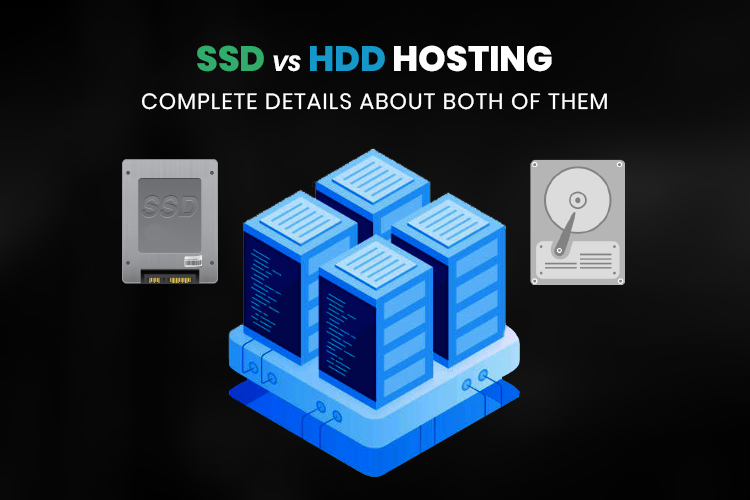 When you decide you choose a hosting plan for your personal or business website, you need to consider many factors, and you typically have two options: SSD hosting and HDD Hosting. Both have positive and negative effects on the performance of your website.

In the past, HDD (Hard Disk Drives) has been the most common storage type. This sort of storage could store vast amounts of data at the lowest cost over the years. SSD (Solid State Drives) has gained increasing popularity in recent years, especially for web hosting needs. Knowing about SSD Vs HDD hosting will help you make an informed decision that will best meet your business needs when you choose a hosting service.

1. SSD vs HDD Hosting: Which One Is Faster?

Speed ​​is often the distinguishing factor when comparing SSD hosting to a hosting package using a standard HDD. By speed, I mean the speed at which your hosting server can both store and access data (read-write) and present it to visitors.

HDDs consist of a magnetically coated metal disk, and a read arm hovers over the disk and stores (read/write) data as needed. The faster the disk itself spins, the faster it can store or access data from the disk drive. Unfortunately, the disk can only spin very fast for a while until it fails, limiting the speed of the disk drive.

On the other hand, there are no moving parts in the solid state drives (SSD Hosting). They provide the same primary type of storage that you need for your personal computers, laptops, or web hosting server, but they can read and write data with much higher speed and efficiency. Unlike HDD hosting with storage space with moving mechanical parts, SSD hosting stores information in microchips, similar to flash memory in storage units.

As a result, SSD is used in the hosting service because it has storage units that don’t need external power to rotate, and there are no mechanical limitations that prevent their speed. Thus, they can store and access data much faster than their rotating counterparts. Since SSDs serve data significantly faster than HDDs, SSD hosting will give you a faster loading speed of your website pages. This speed, in turn, can directly affect factors such as search engine ranking, user experience, conversion rate and often helps your website be more effective.

Data security is essential for every business, ensuring that its data is secure and accessible to visitors. Because HDDs have moving parts, the risk of failure will always exist, and it can cause data corruption and loss. Most hosting providers mitigate these risks by using backup systems, but the risk of data loss still exists, especially for business websites that have heavy traffic sites.

However, SSDs do not use moving mechanical parts, which reduces the chances of failure. Of course, SSDs can wear out and lose performance after many years of use, but they have a much longer lifespan than HDDs.

SSD has a data access speed between 40 and 100microseconds, which means it is 100 times faster than an HDD. As per the demand for solid-state drives, it is improving day by day. All major manufacturers like Samsung, SanDisk, Toshiba, and others continue to increase the hard drives’ speed, space, and stability.

As you know, SSD increases the speed and offers faster read and write time, so in the server environment, it increases the overall server performance by an average of 95%. An increase in server speed means you will run your applications (hosted on an SSD server) quicker and work harder with less stress.

Most of the hard drivers fail due to manufacturing issues or problems with their firmware. Most of the time, SSDs got failed because a specific block is written across far too frequently. Overall, you can consider 10-20 years of lifespan of an SSD, whereas 5-6 years for HDD drives.

Web hosting servers consume a lot of power because they run 24 hours a day, seven days a week, and 365 days in the year to keep your website up and run all the time. According to the IEEE, up to 35% of the power consumed for a server is due to storing data. However, $20 billion is spent on an annual basis for electricity by data centers worldwide.

SSD is environment-friendly storage that consumes less power, and it is one of the reasons why hosting providers prefer this type of storage. HDD uses fifteen times the power of an SSD while idle and 2.5 to 7 times more power under heavy server load.

HDD hard drive has an average capacity of 1-18 TB and larger capacity drives reaching more soon. However, SSDs ranging from 50-100 terabytes are available to use. Storage capacity is always considered when selecting any storage media. SSDs hard drives have a significant return on investment and come with a larger capacity. Big business brands may need more hosting storage as they grow, making SSD ideal for them.

Solid-state drives can read sequential data at up to 550 MBps and write at up to 520 MBps, whereas Hard Disk Drives can only have sequential read/writes up to 125MBps. Solid-state drives have excellent efficiency because they have greater reliability, less power consumption, faster read/write times, rotational latency issues, and many more. As I have discussed earlier, HDDs require physical-mechanical movements for reading or write data from the disc that consumes more power and time.

A newer technology compared to HDDs, SSDs were somewhat more expensive. However, as the usage rates of SSDs increase and the industry evolves, the cost gap has started to equalize thanks to the demand for SSDs. Temok managed cloud and dedicated hosting provider has already transitioned to offer SSD hosting solutions with an innovative hosting service approach.

We offer SSD as a default feature, not an option, in all of our VPS Hosting Plans.

You can choose SSD as a storage unit in all of our dedicated servers; however, if you have any custom requirements, you can also get your customized server by sharing your server requirements with us. SSD storage will give you higher reliability, performance, and improved uptime than HDDs. Thus, thanks to all our SSD dedicated server and hosting plans, your website, blog, or application will be able to continue broadcasting faster and more efficiently.