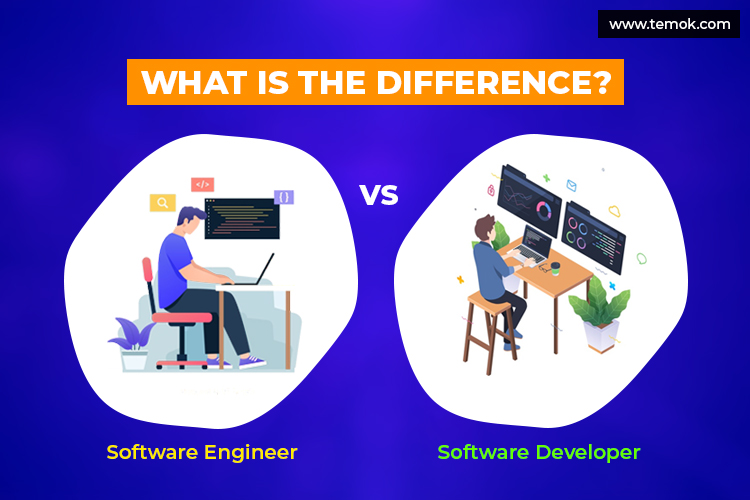 In the IT industry, both terms software engineering and software development can be used as an alternative to each other. The job responsibilities for software engineers and developers are also quite similar. With all the similarities they have, there are still a lot of differences among both of them as far as the demand, expertise and job roles are a concern. This article is a comparison between both professionals and what are the major differences between them.

Many people have difficulty to identify the difference between these professions. If you are a beginner in the industry and want to build your career in the IT development field, but you don’t actually know what to choose and which field has more scope. The developers and engineers are expert professionals who can build software. There are significant differences between the two that you should remember. The companies should also know exactly what they should expect from both professionals while writing a job description. If you know the difference, you can make a very valued technical hiring. Otherwise, you may hire the wrong person for a job position in your company.

Instead, software developers drive creative force behind the programs. The developers are also accountable for the complete process of development. They are said to be the individuals who cooperate with the customers to generate a theoretic design. They formerly have programmers make the code required to correctly run any software. Software engineers can test and resolve issues with developers. Software developers offer technical guidance and project leadership in the development life cycle stage.

There is no agreed difference between software engineers and developers. These professionals build, test and implement software, including systems management programs and computer applications, and numerous government and colleges organizations that consider them to be the same. Up till now, the internet is loaded with the references and professionals debating the terms. For some countries, this is not an issue, where the “engineer” title is very regulated, but in some states such as the United States, the variances between computer developers and engineers are a matter of consideration.

What Software Engineers DO?

Some major roles of a software engineer include:

What Software Developers Do?

A software developer is the one who codes and works on other different tasks related to the development of the software. With a spread of coding languages and systems, developers fulfil all those things to fulfil the needs of customers.

Some of the major software developer roles are as follow: –

Some of the best practices of engineers are as follow:

Some of the best practices of developers are as follow:

Some of the common job titles for both software engineer and software developers are as follow:

As far as the education’s paths of both software engineer and developers are a concern, any person who has an interest in development can have a lot of multiple options. These comprise study courses in engineering, computer science, or programming. The programming courses are usually offered at the bachelor’s or associate’s level. The programs of engineering, instead, are offered at the master’s or bachelor’s level. These types of courses are both longer and comprehensive. They pursue to put on engineering principles to all software development process stages, from analysis of the requirements to another process in development. Software engineers also have a lot of knowledge and expertise in computers, and they also know how to do teamwork. In real-world positions, they will also specialize, they are also expected to step into many other roles related to development. A programmer, in contrast, will mainly learn to do the coding of computer or a part of the software development life cycle. People are more likely to go for Bachelor’s degrees in software engineering than software development.

Software engineers are also expected to finish a project design where they implement the principles of engineering. They offers valuable knowledge to the world outside their classroom. Software engineers occasionally produce different packaged software, but they often make tailored systems for customers. Their main purpose is to help the customers to meet their goals in an efficient manner.

In software engineering, the bachelor’s degrees are typically very technical, they are more likely to focus on the engineering and designing fundamentals. Examples of some of the major course of engineering include:

The software development degrees are more likely to be systems – or data-centric as compared with the degrees of software engineering. Examples of some of the major course of development include:

The market demand for both software engineers and developers are increasing rapidly.

It is conducted by the Bureau of Labor Statistics; developer’s employment is forecast to rise 24% from the year 2016 to 2026 that is very fast as compared with other occupations.

According to job portal Hired survey, it is reviewed that the 9 most desirable jobs related to engineering in the US, with the yearly rise in demand from 4% to 517 %.

Software experts with specialized, complete information are anticipated to relish brighter job forecasts as compared with those whose knowledge and proficiency is just limited to computer programming and coding.

If job responsibilities and requirements are not clearly differentiating a developer from a computer software engineer, then their salaries can be an appropriate differentiator.

In June 2019, it is stated in the Payscale research, the US average software engineer’s salary is $83,681, at the same time as a software developer can make around $70,388 yearly, on an average.

As far the pay by experience is a concern, an entry level software engineer with 1-4 years of experience can make an average total return of $80,381, and a software developer can earn around $67,214.

With an experience of 5 to 9 years, the salary difference of full stack software engineer and software developer is $91,019 and $80,178 respectively.

It seems that with all the experience, the software engineer’s salary is around $10,000-$11,000 higher as compared with a developer’s salary.

Challenges of Software Engineers and Developer

Some of the most critical software engineers’ challenges are as follow:

Some of the most critical software engineers’ challenges are as follow:

Software engineers are anticipated to have more technical expertise, personal achievements and experience working with some open-source projects and tools. They must be expert with automated testing, fault-tolerant systems, and pattern design. They should also know how to maintain and create IT architecture, cloud-based systems and large-scale data stores. They ought to be acquainted with building scalable data pipelines and scalable domain languages. They must work efficiently with remote teams and individually.

Senior software engineers should manage complex systems and web design, analysis, and growth programs. They can play a dynamic role as an individual contributor, leader, and consultant on numerous projects. They must offer analytical advice in implementing and identifying new IT uses to support customers and the company to reach their strategic purposes. They should be able to manage resources, supervise technical project plans and coordinate development tasks. They normally work together with IT, development and operations staff via the development life cycle. Lastly, they have to sustain a smooth-running process by recognizing and acclaiming processes for improvement.

Software developers should have outstanding analytical skills because they are responsive to constantly compare requirements with the capabilities of the software. They must be acquainted with different programming languages to efficiently work on development programs. For doing this, they should have difficult communication and feedback skills. Remember that slight miscommunications or error could be the cause of operational and financial issues. It is also expected for them to manage concurrent projects at different stages of development. Software developer uses tools made by software engineer to develop the application.

Software developers should constantly screen project reported defects and updates to deal with all the essential modifications. Thus, they should continually shift mechanisms between assigned projects, schedules and deadlines. The developers should carry out trial software to guarantee consistency and quality. They have to focus on the perfection to appropriately direct revisions and repairs of programs intended to raise the overall efficiency. The developers can be asked to be the main point of communication with vendors and clients.

For example, a software engineer can make the software like Dev c, and software developer should know how to code on this system.

This article is a detailed and comprehensive discussion of the difference between software engineering and software development. With all the resemblances they have, there are still a lot of differences between both of them as far as the expertise and job responsibilities are a concern. Software engineering is about engineering principles applied to make software. The developers are also answerable for the complete process of development. It appears with all the experience; the software engineer’s salary is higher as compared with a developer’s salary. Software engineers are expected to have more technical expertise, personal achievements and experience working with some open-source projects and tools. The developers should have analytical skills because they will be required to constantly compare requirements with the capabilities of the software.

I hope the knowledge I have shared with you in this article is helpful. You can share your thoughts about this article in the comments section.

Do share this article in your circle, if you find it informative.