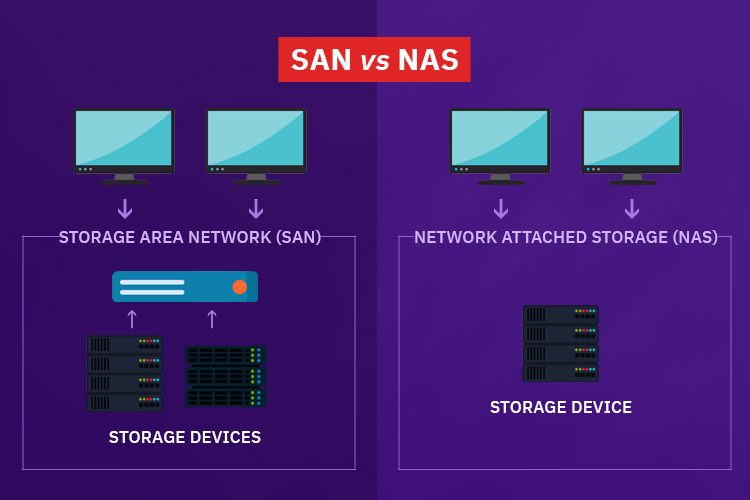 Both NAS (network-attached storage) and SAN (storage area network) were created to fix the issue of making saved data or information available to several users at the same time. When we talk about SAN vs NAS, the storage area network shares the storage to a dedicated network, and network-attached storage shares the storage over a shared network. However, both provide dedicated storage solutions for many customers and work on the same mission by adopting different ways.

NAS is comparatively affordable because it serves files over Ethernet and simple to set up, but SAN is a closely coupled network of several devices that operate with block-based information. SAN is significantly more costly and complicated to set up and handle. NAS devices seem like volumes onto a document server and utilize NFS and SMB/CIFS protocols, whereas SAN-connected disks appear to the user as local drives.

A SAN is a means to provide users with shared access to merged, block-level information storage, even allowing multiple customers to access files at precisely the same time with tremendous performance.

SAN is the name of specialized, high-speed network used to provide users a shared access to consolidated, block level data storage, and allows the several users to access the file at the same time. It is used to enhance the accessibility of storage devices such as tape libraries and disk arrays and make them appear to users as if they were external hard drives on their local system.

The most Frequent SAN protocols are:

Each of the fiber channel devices is known as node ports like servers storage and tape libraries. You can understand the real time concept of both SAN and NAS in the picture given below:

As it’s much more complicated and costly than NAS, SAN is generally employed by big corporations and requires a government with an IT staff. Some programs, such as video editing, are especially desirable due to the high rate and low latency. Video editing requires just and guaranteed bandwidth utilization throughout the system, which can be an edge of SAN.

The main advantage of a SAN is that each one the file accessibility negotiation occurs over Ethernet. In contrast, the documents are served through exceptionally large rate Fibre Channel, which translates into quite snappy functionality on the client workstations, even for relatively large files. Because of this, SAN is widely used now in video editing surroundings.

The challenge of SAN could be summed up at its price and management requirements — needing to dedicate and preserve both a different Ethernet system for metadata file asks and execute a Fibre Channel system may be a substantial investment. In SAN vs NAS, storage area networks are the only method to provide very rapid data access for many consumers who can also scale into supporting hundreds of customers in precisely the same moment.

A NAS is a computer attached to a system or network that offers file-based data storage solutions to other devices available on the network. NAS installation and deployment process is more straightforward and simpler. Network Attached Storage volumes appear to the end-users as community mounted volume.

The data to be served is usually contained on single or multiple storage drives, frequently arranged into logical, Redundant Array of Independent Disks. The device itself is known as a system or network node, similar to computers or TCP/IP devices, all of which maintain their particular IP address and efficiently communicate with other networked devices.

NAS devices offer you an easier way for many users in different locations to access data, which can be valuable when working on the same project or sharing information.

NAS encourages collaboration by providing great access controls and a higher level of security. It also enables the non-tech persons who are not IT professionals to administer and handle the information. Additionally, it supplies adequate basic data protection through redundant information structures (RAID) and automated backup solutions to cloud and local devices.

A Network Attached Storage is often another step upward for a house office or small company that’s using DAS (direct-attached storage). The transfer up to NAS results in the urge to share documents locally and have documents accessible 24/7, information redundancy, the ability to replace and upgrade hard drives from the machine, and access to different services like an automatic backup.

NAS has some weaknesses in scalability, functionality and performance. Whenever more users want to access, the host may be unable to maintain and may require the inclusion of server horsepower to fulfill the users’ requests. Another drawback of network attached storage is related to Ethernet’s nature because it transfers information from a single place to another via programs, dividing the origin into a variety of sections and sending them with their destination. Any of these packets may be postponed or shipped out of sequence and may not be accessible to the users/clients until all the packets arrive and are placed back in order.

Any latency (slow or retried server connections) is generally not detected by end-users for smaller files. Still, maybe a significant difficulty in demanding environments like movie production, where documents are enormous and latency over just a few milliseconds, can interrupt manufacturing measures like rendering.

The advantages of SAN are inspiring some sellers to provide SAN-like products at a lesser price, mainly by avoiding the high cost of Fibre Channel networking. This has caused a partial convergence of NAS and SAN strategies to community storage at a lower price than SAN.

For smaller deployments, iSCSI is much more affordable, letting SCSI commands be routed inside IP packets to a LAN. Both these approaches prevent costly Fibre Channel entirely, leading to slower but less expensive methods to acquire the block level accessibility and other advantages of a SAN.

You have got a comprehensive overview of SAN vs NAS, so it is up to you what type of storage would you like for your particular business. For taking a successful decision, it is mandatory to understand your business needs and choose any of the storage that better suits you. There are many benefits if you are using the right dedicated storage for your business.