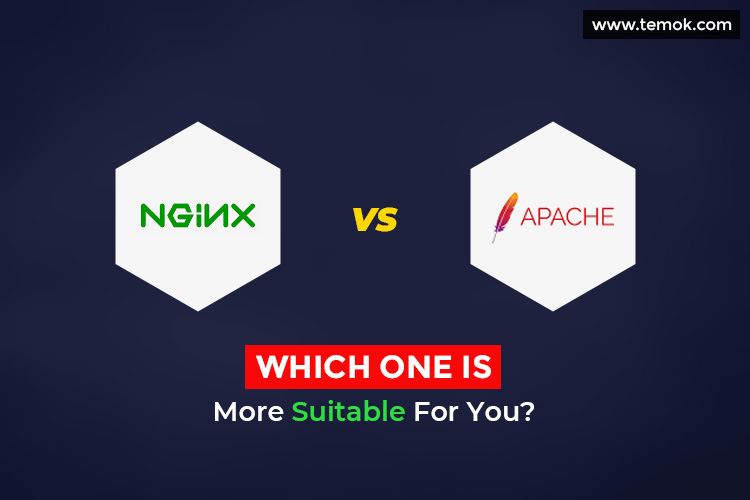 Both NGINX (pronounced as “Engine-X”) and Apache are popular open-source web servers used to deliver web pages to a user’s browser. However, which one is more suitable for you? In order to run your website more efficiently, it is very important to choose a web server according to your business needs. In this article, you will learn all about NGINX vs Apache most widely used open-source webservers.

Apache was initially released in 1995, whereas Nginx was in 2004 and both are most widely used by large fortune 500 companies all over the world. Around 50% of the traffic on the internet is served by both Apache and Nginx. In some special cases, the Nginx has a competitive edge over other web servers in terms of performance.

Apache has been the first choice of developers for 20 years because of the availability of different helpful resources. Nowadays, technology is changing day by day, so due to its certain design elements, it can’t fulfill the modern web demands. Whereas the market share of NGINX is rising and getting popularity as you can view the report by w3techs.

Every web page has HTML tags and needs a computing machine with a server program to be delivered to the end-users. Webservers like Nginx vs Apache are used for handling and analyzing requests and giving the response by corresponding documents to the end-user browser.

There is no perfect server that has the ability to fulfill all types of business requirements but which technology is more suitable for is depends on your business goals, objectives, and needs. By choosing the best server you can increase the functionality and speed of your website. If we consider the top one million websites, Nginx is most widely used.

This fact is also verified by Google trends.

Let’s talk about the Apache, it was initially released in 1995 and become the world’s most used and popular web server. Apache is developed and maintained by a large group of developers through the Apache software foundation under the Apache License and still has a good market share. There are two different stories behind the popularity: the name originates from the famous American heritage and the name is a pun on “a patchy server” which followed a number of software patches.

The request processing methodology can be set up in the following multi-processing modules:

It uses the high amount of RAM based on the “pre-fork” method and not well scalable with large numbers of concurrent connections. It is suitable for smaller domains, but when it comes to the larger ones it may refuse the connections when loads are high.

In this model, it creates a listener thread to listen to the connection requests and forward these requests to a worker thread for processing. After the Apache 2.4 release, the event model becomes the default setting if the machine operating system supports. Moreover, you have run-time and compile-time options to improve performance.

In this model, a particular control process will be established and creates sub-processes. Each one further set a number of threads including the listener. This model is more scalable than the pre-fork method, but you may face any issues with high traffic due to the bottleneck of a single control process.

Nginx was developed in 2004 to fulfill the challenge of serving 10,000 connections based on modern web demands. Simply, it is used to process a large number of users at the same time in an efficient manner. Nginx has event-driven architecture and based on non-synchronization to handle high loads. Unlike Apache, it doesn’t set up an extra worker process for each connection and uses one worker process for each CPU to maximize the efficiency of hardware.

Does the question arise in the mind of why it is getting more market share? Because it has a reverse proxy server for HTTP, HTTPS POP3, SMTP, IMAP, HTTP cache, and a load balancer. Moreover, it also has frontend proxy for web server including Apache to excel in static content handling abilities. Nginx has FastCGI and SCGI handlers for PHP, Python, or other dynamic content scripts. It uses the LEMP stack (Linux, Nginx, MySQL, PHP).

NGINX vs Apache – Pros and Cons

Both web servers are developed according to particular business requirements, so understand the advantages and disadvantages of both to make a good decision.

Apache is still considered the best choice by many developers and website owners. It can be used with any operating system, integrated support with many popular software projects, and best documentation.

Following are the other key benefits:

However, it cannot process multiple requests concurrently in case of heavy traffic. Because it uses the multi-threaded approach for client requests, and each thread can only handle one connection at a time. Moreover, it consumes more RAM under heavier loads and less efficient because of new processes for each request.

NGINX is designed to handle the great number of requests in a more efficient manner. It has a lightweight architecture and high concurrency rate to fulfill the changing demands of websites.

Following are the other key benefits:

Its major downside is that it has less community support and cannot process dynamic content natively. Inginx has a less extensive list of modules and uses an external processor for the execution of dynamic content that slows down the process.

NGINX or Apache is a close call because over-expanding features offered and each web server excels at things that the other can’t perform better.

It is very difficult to determine whether Apache or NGINX excels here, but most of the core module functionality is present with both web servers. NGINX considered better at acting as a reverse proxy for TCP and email connections and commercial plus version is also used to expand the functionality.

Nginx vs Apache – When To Use?

There are different factors that must be considered before finalizing your decision either you should use an Nginx or Apache. You have studied the pros and cons section above that will help you to decide which one is more suitable for you. If you need improved performance for static content then the Nginx is better for you.  It also ahead in terms of VPS hosting, scalability, media streaming and reverse proxy.

On the other hand, Apache may be preferred to modify a .htaccess file for server configuration purposes that is not available in Nginx. Moreover, Apache more suitable for shared hosting environments and useful for making server-side changes. Apache also has a good community providing helps for beginners with more readily available information and support.

If you are unable to decide between Nginx vs Apache, there is also an option to use both at the same time. Either you can use both servers as proxy servers or put Nginx in front of Apache as a reverse proxy. When you will use the Nginx as a reverse proxy it will handle all requests. In case of static content, Nginx will deliver the content otherwise it will proxy the request onto Apache where it will be processed and received back to Nginx.

The combination of both webservers is appealing to particular website owners who want to offload from Apache and allow Nginx to serve static content because it is a good approach. It totally depends on your requirements either you employ an Nginx vs Apache web server or use both.

NGINX vs Apache: Which One Is More Suitable For You?