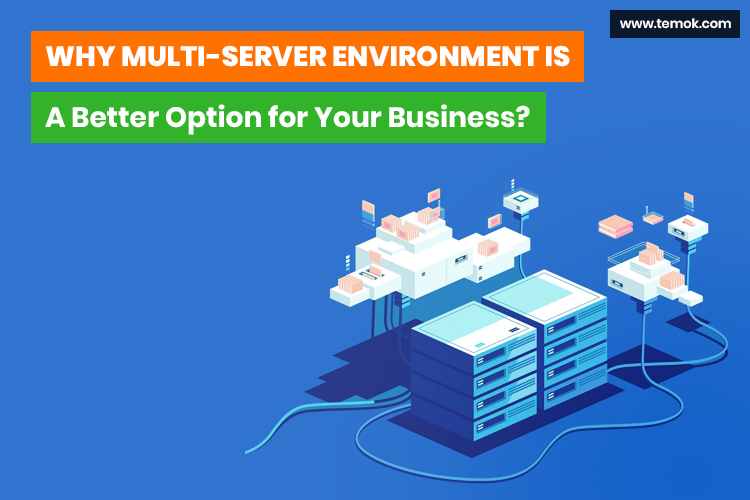 There are many of the companies shifting to the multi-server environment because of high reliability and proficiency of their businesses. There are many reasons, you should use the multi-server environment for your business. In this article, I would discuss some benefits of multi-server environment for your business and what are the best multi server services option available in the market. The use of multi server system in the business generally helps guarantee high performance and uptime, sustain security, and enables more efficient resource allocation. There are many other benefits of dividing the resources onto many servers, and on each server running changed operating systems. Web apps can be typically divided into application and web tiers if needed. All of the servers are configured and provisioned based on the demands of the function.

The agencies and SMBs can also get advantage from resources server splitting to run various functions on multi servers. This allows to make more connections and reduce the dependability on a single server. This rapidly turns out to be the most cost-effective way to confirm system performance and reliability and it is also an indicator of the mature network. Eventually, agencies and enterprises with huge networks may end up with a separate server for each function to reduce the redundancy. Here are some of the major benefits you can get from multi-server environment.

The monitoring of your resources, data or system very much depends on your server setup. The multi server environment allows more effective monitoring of the resources. For any organization, the monitoring of the functions and resources is essential to ensure better performance and efficiency, but a granular interpretation usually helps to confirm maximum uptime and better performance, security, and in most of the cases, it also allows more competent allocation of resources to multiple systems. There are many possible profits to splitting off the functions on more than one server, as well as using the different OS on the servers.

As we know, with the advancement of technology and digitalization of businesses the threat of data and resources security is also increasing. For any business online security is one of the major concerns because if you are not keeping your data and resources secure, your business is always at stake. One of the best things about using multiple servers is that it provides better security against cybersecurity issues and other data protection problems. When you are using multiple servers for resources allocation your data is separate from the core servers and in case of some security attack happen on the servers it would not have any impact on the database or other resources separated from the servers. On the other side, when you are using all of the resources on the same servers, the virus or hackers attack can damage these resources at once and you can lose your data with the exploitation of resources.

For the companies who have to deal with the confidential data, for example, banks who have to handle the confidential and financial information of clients should use the Multi-Server Environment by splitting off the databased from the servers. Separating the database would keep your information safe and secure and in case of any cyber-attack, your database would remain inaccessible for a hacker. I would recommend the large and growing businesses to use the Multi-Server Environment to ensure more security and safety of their data and resources and it is also an indicator of their long-term success.

In the Multi-Server Environment, allocation of the system resources unequally to numerous servers depending on the needs of their functions, in doing so the resources can be efficiently used. The database server overall performance can often be upgraded by organizing it to cache common tables and queries, and by modifying the quantity of real-time connections acceptable, for example by MySQL server “max_connections” variable setup. Multi-server environment improves server performance and resources scalability.

There are numerous organizations, yet, that could improve their system performance, cost efficiency, and reliability by dividing the resources but do not actually go for it. If you are currently making a plan to take online expenses or serve any industry, you may need to have some separate functions band resources for this purpose. In case, your company has updated its server with content growth, and particularly if the resource requirements of one specific function are triggering the major problems, splitting off the resources is probably the best option available to deal with the issues.

You should know that the upgrades of server rise the overall cost, but not essentially consistently. If you are going through some issues related to server performance especially in the resources like RAM or CPU, multi-server environment is the more cost-effective to improve the performance rather than upgrading the system. In case, you cannot afford more servers or run out of RAM spaces, dividing your functions to multiple servers would help you to optimize the resources and resolve all performance-related issues.  Separating the resources from the servers would allow you to perform all functions tasks separately and it is one of the most benefit9ial ways to get the maximum benefit of your server environment. In some of the situations, businesses can improve their system reliability, dropping its cost. The needs and roles of database and application or web servers are fairly different, and splitting them off would benefit you a lot.

A multi-server environment allows you to have more services and connections, supports to keep the system in working condition because of dependency of resources on single system reduced, and is also less expensive each month server’s architecture than constantly adding resources to the server. There are said to be two or three servers in the lower price level, adjusted to service-oriented, separate roles will typically offer better performance at a lesser price as compared with the most influential server setup available. In some cases, a quad-core CPU or high-end dual server can price more on its own as compared with the 2 or 3 systems running modest CPU resources.

In the multi-server environment, each server is responsible for its own functions and tasks. Using these servers would reduce the dependability of the resources on each other. For example, if you have a separate database server, and your core server does if would not have any impact on the database servers. In a single server, all of the database resources are dependent on one server and it also causes the resources contention when using the same server. So, it can be said that the multi-server environment is one of the most reliable option to make your online business more secure and reliable. Deploying multiple servers can reduce your dependency on a single server.

Assigning more CPU centres to a database server is very effective, for example, you can control and manage simultaneous queries higher volumes. Maybe more significantly, by using numerous servers, each server configuration can be personalized to function that it has to perform. The database server performance can be enhanced by organizing it to the cache common tables and queries, and the modification of the simultaneous connections also allowed.

Moreover, a lot of regulations and best practices are needed for the Separation of Duties, for example, the PCI-DSS. According to PCI-DSS rule, any database record that contains PCI data such as credit card information should keep on a server that does not connect with the internet. Dividing the resources into two appropriately organized servers offer this separation and make the system obedient with this instruction.

The requirements and roles of the system database and application servers are very different from each other, and dividing them can offer a lot of benefits. By using these servers, you can also support more services and connections, and in case of any issue at one server happen it would not have any effect on the performance of other servers. Arranging the database to separate server is one of the first main landmarks in the standard small IT system evolution to a bigger one, this kind of servers are also more suitable for a web-based business.

There are numerous issues restricting the quantity of connections s separate system can control in practice. The single server that hosts applications, databases and as a minimum one website go down by any of them if the connections are weak.

There are many ways to can get multiple server environment services. Many platforms are offering multiple system platform setups. Here are some of the major and most effective services that you can consider when going for multi purpose server.

The Platform as a service (PaaS) is said to be a cloud computing model that provides the third-party provider software and hardware tools — typically needed for the development of some application for internet. A PaaS provider offers the hosting services such as software and hardware on its set-up. A PaaS service provider supplies and builds enhanced a and resilient environment that allows the user can install data sets and applications. Users can emphasis on running and creating applications instead of maintaining constructing and the fundamental services and infrastructure. This platform also offers storage and compute infrastructure with version management, text editing, testing and compiling services that would help the designers to create new software efficiently and quickly.

A Virtual Private Server (VPS) is said to be the fastest and most innovative option for getting the services for implementing the multi server environment. Here, you can also split the single server into separate virtual machines, working on their own operating systems management custom configurations.  The VPS servers have dedicated resources such as RAM and CPU it works separately from all websites on the same server. So, it can be said that a virtual private server of good quality frequently ranges from RAM 2 GB and 2 vCPUs up to 16 GB of RAM and 8vCPUs. There are a lot of VPS packages available online and many of the hosting providers in the market are offering the VPS services at reasonable rates. The low-cost VPS can offer a lot of resources for numerous new startups, but growing the amounts of resource on servers or allocating a separate servers for each resources would not only help you to manage the resources effectively but if you also allow you to manage the traffic on all website effectively or if you have one large website, it would allow you to effectively manage the functions and database of that website.

For the businesses with a low budget, the VPS is the most appropriate option to go for. Some of the hosting company can also divide up the overall maintaining and operating cost of the server among all tenants that are working on the same server. In doing so, you would see a clear reduction in your overall budget.

So, it can be said that, if you are a large company or business in the growing phase, the VPS multi server services are probably the best option available for you.

In this article, I have shared with you some of the major benefits of using the multi-server environment and how it would help your business to ensure long term stability and success. Some of the best services platforms are also mentioned in this article to implement the multi server environment.  I hope this information would help you to make a better decision about your server setups.

Do share this article in your circle, if you find this helpful.

6 Reasons Why You Should Start Using A Multi-Server Environment