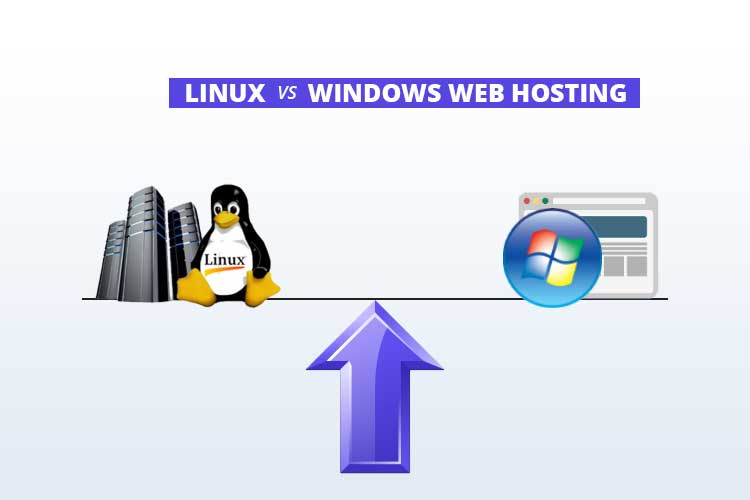 When you think about getting your first web hosting plan, you should choose not only the type of web hosting plan for your website but also the infrastructure, that is, know the difference between Linux vs Windows Web Hosting.

In this article, you will learn about:

The importance of knowing the difference between Linux and Windows hosting,

What is the difference between Linux and Windows Hosting? What type of infrastructure is more suitable for you?

Why is it essential to understand windows hosting versus Linux hosting?

Specific server-side applications will require Windows hosting, such as those written in:

Applications that Window does not support

Common programming language and RDBMS in windows and Linux based web hosting:

Accessing and managing your Windows hosting server is much easy because you are familiar with Windows operating systems. However, if you want to interact with the Linux operating system, it will require you to learn how to use the CMD (command line). Otherwise, you need a Linux administrator to do this for you; learning to integrate multiple software pieces via the command line interface can be challenging for beginners. To combat this, you can choose a control panel with GUIs (graphical user interfaces) like cPanel to interact with the operating system. But there is no need to worry about it because TEMOK provides managed services and the technical staff is ready to help 24/7/365.

Using the Linux hosting for their websites can access the server through cPanel and WHM, but Windows users will access through a Control Panel known as Plesk.

The economic aspect is evident between the Linux and Windows hosting options because Linux web hosting is always cheaper since it is opensource and does not require large expenses. While in the case of Windows Hosting, you must pay for a commercial license and if additional programs are needed, you must pay for them. If you have a limited budget or looking for the lowest priced web hosting, then Linux hosting would be the right option.

Being an open-source platform, Linux is free and doesn’t require any licenses. Linux Hosting is more affordable than Windows Hosting. However, there are areas where Linux and Windows servers are the same, as in:

These factors are significant while choosing the more suitable hosting type. But it is worth mentioning that both Linux and Windows are not exempt from problems and attacks on their services, which are usually solved—considering that in the technological world improvements, it is necessary to keep up to date your services. While we believe the Linux vs windows web hosting, both are safe and reliable. Moreover, Linux is an open-source tool with a larger community of users behind it, testing, improving, and maintaining its services’ stability.

Windows is more practical in the interface aspect because it has a more graphical and intuitive interface since people are also familiar with it. On the other hand, Linux has command lines that are used to do almost everything speedily. Still, it is not friendly or straightforward for ordinary people and requires a level of basic knowledge that many do not have.

Although management is at the server level and the client generally manages their operations through a control panel (cPanel is very popular), there could be cases where this level of knowledge is necessary if a plan is chosen complete VPS or a dedicated server. It should also be taken into account that the administration is carried out through a control panel with all the respective management functionalities. Still, it is essential to have an idea of ​​what is beyond this interface.

What kind of infrastructure should you choose, Linux or Windows?

A Linux hosting package is more suitable for:

People who want access to a large stock of open-source applications, ready to use.

A Windows hosting package is more suitable for:

People who want to build/have more complex websites generally require languages ​​like Perl, ASP, PHP, etc., which would be more suitable for a Windows server.

Now that we mention the difference between Linux vs Windows Web Hosting, it is clear that there are advantages and disadvantages to both. Your choice depends on the type of business requirements you have. However, it is essential to note that in recent years, with the rise of the cloud, web developers are moving away from infrastructure and more into the applications they want to build.

The OS type may stop importing in the future. As an indication of this, Microsoft is increasingly focusing on its cloud offering, Microsoft Azure, which powers its Windows servers. Temok is also offering you a range of managed cloud hosting options.