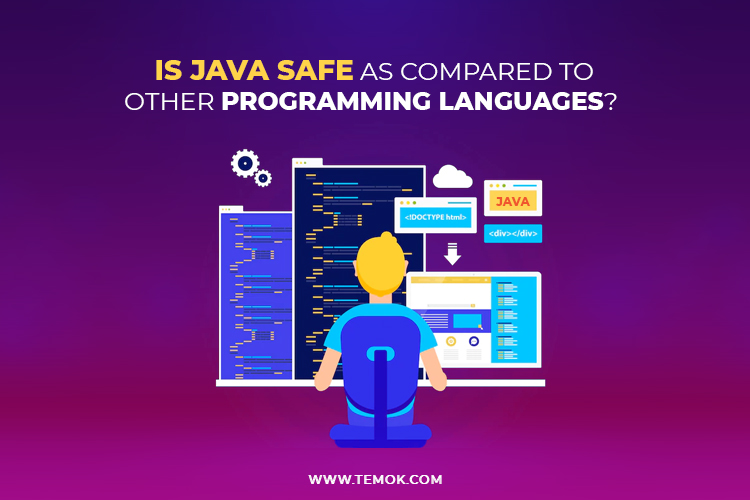 The Java programming language is becoming popular daily due to its speed, efficiency, security, and readability. Java developers are also in demand as more businesses are using digital technology. So, is Java safe as compared to other programming languages? Java has robust security capabilities, and this is the main reason that many companies are using it.

Java has many features like private transmission, automatic memory management, and corruption prevention. You don’t need to be worried about whether is Java secure or not?

We have discussed all facts that is Java safe still in 2022. This article aims to understand is Java safe and why you should use it.

Why is Java Safe?

Java is a highly safe language due to its many different features. Following are described:

Java’s Security As Compared To Other Programming Languages

Java is a more secure language as compared to other programming languages. Following are the reasons why is Java safe:

The function of Java Compiler is to catch more errors, and it doesn’t assign memory directly. In the Java programming language, it is improbable to reference the memory used by other applications and programs.

Java platforms have their memory management. Therefore, it is no need to clear the memory in the program. Programmers are safe from the headache of removing memory.

Java verifies the bytecode before executing the program. It reduces the risks of running malicious code.

The string is immutable in Java. It removes the chances of one thread changing the strings owned by other threads.

Java’s private and specific keywords keep data safe and secure. With public keywords, there are many chances to override keywords. Private keywords help a programmer hide important data when running a program without worrying about other external details.

Java compiler checks every variable in the program. Traditional classes such as “Integer” can be penetrated easily. Data input in every variable is enclosed into a safe class in Java. Each variable wrap provides an additional security layer for Java from hostile programs.

Java has a secure garbage collection that frees memory. Developers can quickly recover unused memory with the help of the Java mechanism. The system has a transparent allocation protocol that makes sure the completeness of each program execution procedure. Increased and transparent memory management makes the usage of malware resources very difficult.

Java manages the internal memory and data management systems. Java owns memory. Developers don’t need to be worried about memory problems. It means the Java management mechanism automatically frees memory if it is required. This automated system minimizes the overall programming costs. It also allows you to work well on app development.

Pointer values efficiently manage application memory and protect data in programming languages like C and C++. Unfortunately, hackers use pointer values to access sensitive data too. Pointers cannot verify users who request data. In this way, pointers provide hackers with memory access without verifying their permission first. On the other hand, Java uses its memory systems & internal data management to prevent unregistered access to information. It is much more challenging to penetrate Java systems.

How to Secure Yourself From Attacks?

Though Java is a safe language, it requires more improvement. Let’s have a look at how can we stay secure and updated.

Make sure that you are aware of the latest security attacks. When you stay updated, it helps you to remain safe.

If you are a developer, you know how to write flawless code. Don’t keep secrets in the code because the secrets kept in the code will never be secret. It would be best to try to make less use of your crypto algorithms. String stays in memory for a long time, so use a character sequence for passwords rather than a string.

Some common security attacks are following:

SQL injection is the placement of malicious code in SQL queries through web page input. It can destroy the database or sometimes exposes sensitive information. These attacks can be removed by verifying every input field and avoiding dynamic queries.

Exploiting LDAP protocol is another standard security attack faced. This attack can be removed by inputting validation and by avoiding special characters.

Cross-Site Scripting is also a very common security attack found in web applications. This type of attack is usually used to bypass the access controls by injecting the client-side scripts to the web page viewed by the users. Validation and data sanitization are keys to protecting the application against cross-site scripting (XSS) attacks.

Is Java safe, or is Java dead? Yes, it is safe, secure, and still relevant compared to other programming languages in 2022. Use the updated version of Java. If you use older versions of Java, it creates security vulnerabilities. So, stay updated with the latest versions. Java’s security features are more robust as compared to others. Java’s applications are at higher risk due to their ubiquitous nature. By following security code principles and writing simple and clean code, many risks can be removed. Many Java security features are explained above in the article. Java compiler converts Java code into byte code. After that, the Java Virtual machine uses this bytecode. JVM(an interpreter) is installed with the latest security updates on each developer’s computer. The JVM quickly looks after the security when these byte codes are executed.