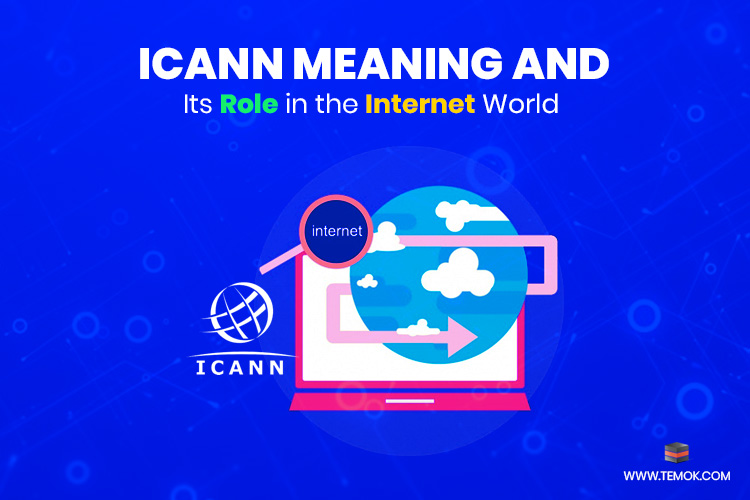 Whenever users want to access any website from the internet, they should enter the address of that particular website on their computer. It is understood, the address of the website can never be duplicated. ICANN is the authority that keeps the internet running by assigning and securing the unique identifiers. In this article, I am going to talk about the ICANN meaning, all necessary details and its roles in this digital world.

What does ICANN stand for? The “Internet Corporation for Assigned Names and Numbers” is a non-profit partnership of people established in 1998. It doesn’t control the content on the internet but provides unique addresses for the global internet experience. ICANN meaning in the internet world is a central repository for IP addresses that provide unique IP addresses across all over the world and manage the root servers and DNS (Domain Name System).

People register a domain name that better represent their business address on the internet in any particular niche with the help of a domain registrar who pays a few changes to the ICANN for the completion of domain registration. Once the domain is registered, now he will get the cheapest web hosting or dedicated servers according to the specific business requirements from a reliable hosting provider to host his website on the internet. ICANN form different policies for the unique identifiers (name or number) of the websites on the internet. If every website has a unique address, every computer can easily find and transmit/receive data packets. ICANN is playing its role in the expansion and evolution of the internet by better coordinating with naming systems.

How ICANN Relates To DNS?

DNS (Domain Name System) is a system that makes it possible for people to access the websites on the internet with web addresses or IP addresses. Computers find the destination or any other computer on the internet with the help of a series of numbers (known as IP addresses), however, it is impossible for humans to remember the list of all numbers. The DNS converts these numbers into letters and assigns the specific letters to a specific series of numbers. Once the conversion is done, anyone can access the website by its name instead of entering a series of numbers but computer machines are still communicating with the help of these numbers as you can see in the image given below:

For example, the Temok’s website can be found at “temok.com” rather than “178.162.151.48” but the HTTP request will use the IP address provided by the DNS server. Another advantage of DNS is the prevention of a domain from being tied to any particular computer because the link between an IP address and domain name can be changed quickly. Once the change has occurred, it will take less than 48 hours because of constantly updating DNS infrastructure. Any domain name is based on two elements: before and after the dot. The element after the dot such as “com” “net” “gov” “edu” “org” and so on, is known as TLD (Top-Level-Domain). All domains under any particular TLD with their IP addresses are under one company known as ICANN registry. This registry has the complete list of all domains under any TLD in a well-organized way.

The element before the dot is the name of an organization or company and known as domain name that is registered through ICANN accredited registrars. The domain name is used for their website, emails and more.

Many domain registrars are offering the domain registration facility to the people at different charges but they pay a fixed fee of a domain to the particular registry where the domain is being registered. ICANN has contracts with each registry and runs an “accreditation system” for registrars that provide a stable and consistent environment for the domain name system. However, DNS provides easy to remember addressing system to the humans to find any particular website on the internet.

How ICANN Relates To IP Addresses?

As you have understood the administrative role of ICANN for the domain names that are used by the people in the above section, it also plays a similar role with IP addresses. Anyone can never register and use the two domains of the same name; it also applies on the IP addresses; same two IP addresses can never be used.

How ICANN Relates with Root Servers?

There are a total of 13 root servers having 13 IP addresses on different physical locations and operated by 12 independent organizations. The root server system consists of 1084 instances and it is a part of supporting infrastructure of the internet. However, you can also say that it is the backbone of online access. Theses root servers store a copy of a file that acts as the main index file to the internet’s address books. Each TLD (.com, .net etc.) has an address listed where the registry’s own address book can be found.

Once the computers on the internet know the IP address of any particular domain name they retain and occasionally check to make sure the IP address has not changed. We can say that root servers play an important role in the smooth functionality of the internet. Now you are considering about the ICANN meaning in the case of root servers, let me provide you the concept. Although the operators of the root servers are capable to remain largely autonomous they need to work with each other and ICANN to make sure the system is up-to-date with the changes and advancements of the internet.

What is ICANN Meaning and its Primary Purpose?

As you know, ICANN has huge and complex interconnected network of unique identifiers that are very helpful for the communication of computers on the internet. The primary purpose of ICANN is to make sure the internet is running smoothly all over the world that is also known as “universal resolvability”. It means you will get the same results when you will access the network from anywhere in the world. With the help of ICANN, you have only one internet, rather than internet worked differently depending on the locations.

What is the ICANN Structure?

ICANN is based on different groups where each represents a different section of the internet and contribute to the final decision. Following are the “supporting organizations” that represent:

The following are the “advisory committees” that provide the recommendations and advice to the ICANN. These represent:

Moreover, there is a “Technical Liaison Group” that works with those organizations developing protocols for internet technologies.

All final decisions will be made by its Board of Directors. There are a total of 21 members of the Board: 15 have voting rights whereas 6 are non-voting liaisons. If we talk about the voting members, there are a total of eight members that are selected by an “independent nominating committee” but remaining seven are nominated by supporting organizations.

ICANN has a president and CEO (both are also board members) who manage and implement all the decisions made by the advisory committee and supporting organizations. Moreover, there is also ombudsman that review the working of staff and the board.

What does ICANN do and How it works?

ICANN meaning, an organization coordinating unique identifiers (a name or number) across the world. In more technical terms, ICANN helps coordinate the IANA (Internet Assigned Numbers Authority) functions, which are the main technical services critical to the continued operations of the DNS (Domain Name System). Following are the IANA functions:

ICANN also provides technical operations of vital DNS resources and defines valuable policies for how the “names and numbers” of the Internet should run.

The work moves forward in the following styles:

The members of sub-groups can also raise issues at the basic levels rather than the topics declared by the board of directors. If the addressed issue has worth and falls within ICANN’s responsibility then it will rise through the supporting organizations and advisory committee until the policy is formed and passed to the board of directors for voting and finalization.

With the help of international meetings, processes, and bylaws, ICANN provides the opportunity for all advocated to discuss internet policy issues. Moreover, almost anyone can join ICANN’s volunteer groups assuring the board representation of the world’s perspective. Searching for mutual interests, listening to different points of view, and making efforts toward consensus take time but the procedure resist capture by a single interest is an important consideration.

ICANN’s approach treats the public, private sectors, and technical experts as peers. You will find registries, registrars, ISPs (Internet Service Providers), commercial and business interests, intellectual property advocates, non-profit interests and non-commercial, representation from more than 100 governments, and a global array of individual Internet users in the ICANN community. All the point of views is considered on the merit basis because they believe that all users of the Internet deserve a say in how it is run.

What does ICANN do and how they make any decisions for changes? If they need to make the technical changes to the internet then the following process will be executed:

The supporting organization will suggest any changes or any concerns identified by the advisory committee. These changes are discussed and a report is published for the public review. If the changes that are going to be implemented have an impact on any group within ICANN’s system then that particular group will also review the advised changes and the result will be published the second time for public review.

The ICANN board will be provided with a report having al the outlines of previous discussion and recommendations. Now the board has a free hand to approve/reject all the changes partially or completely. The issue is sent back to the supporting organizations that are involved in this process with the details of what they need to be amended before the final approval.

What are The Core Values of ICANN?

Following are the most important core values of the ICANN:

ICANN plays an essential role in the management and maintenance of the internet. It also continues to evolve the internet of tomorrow and ensure that the internet remains open to all users from all over the world on a single network (or internet). If you want to start your business in some future dates then register your international domain before anyone else does.