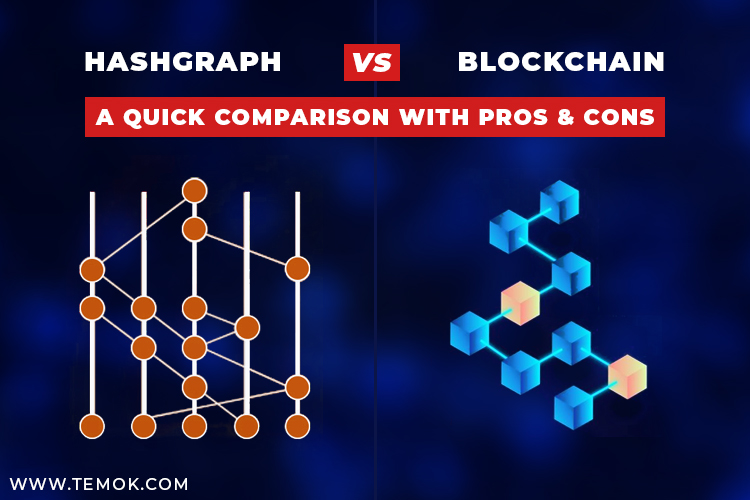 Hashgraph vs blockchain is quite a popular debate these days. Hashgraph and blockchain technologies are somewhat similar. Thus, it only makes sense to compare them. If you know a little bit about blockchain, you will know that it evolves every year at a very rapid pace. Hashgraph is a distributed ledger technology that is a competitor of blockchain. The management of hashgraph claims it to be more reliable, safe, and fair. The following reading contains a good comparison and answers many questions on the hashgraph vs blockchain debate.

What is a Hashgraph?

Hadera Hashgraph? The most common question that we get. Hashgraph is a platform that offers a consensus approach. It isn’t a complete system and, specifically, a distributed ledger technology with structured algorithms. The platform is designed to provide its consumer with a fair, secure, and fast network facility. Primarily it can be counted under blockchain alternatives. Let’s learn all about Hashgraph vs block chain below.

Advantages and Disadvantages of Hashgraph

Hashgraph is known for its low energy consumption. The biggest advantage of this distributed ledger is that it gives it an edge over others. The storage required at hashgraph to maintain the live ledger would use less than 1 GB. Furthermore, The transaction record that you make gets deleted eventually. Thus, artificial intelligence works better with this distributed ledger technology. As you start using it, you will also notice that a transaction is available within minutes, and you will save a lot of time at hashgraph.

Hashgraph has a secure security method installed in it. It uses Byzantine Fault Tolerance (BFT). This prevents the network from bad actors; as a result, all the events are recorded correctly. The best part about it is that even if there is some malware and malicious presence in the system, it won’t let the data be tempered. Thus, this increases the reliability of the hashgraph a lot.

Hashgraph uses the gossip method to increase its speed. As the events start to take place, less information gets spread. The gossip method does not allow a lot of information to be propagated across the network from one place to another. Thus, keeping the information in one place most of the time helps big time in doing the work at a rapid pace.

Hedera Hashgraph’s charges are surprisingly quite low and start from $0.0001, contingent upon precisely how you want to get treated the framework. However, the expenses are immaterial and a long way from the $15+ that famous blockchains charge per exchange. Thus, there may be fewer expenses for the user than the blockchain.

There is no decentralization in the hashgraph. Hashgraph has a centralized placing-at-one place system, making it annoying to use. Though now, the technology claims that it is being decentralized with time. The Hashgraph management says that even today, it is not centralized fully. However, the evidence has shown that mostly hashgraph is still centralized with few enterprises involved in the process.

Hashgraph technology is currently patented. Patents have protected it up until now. The patent was a designed tool to inhibit forking. The inhibitory forking is directly associated with preventing instability and loss of the network. Since not all p[atented technology has a financial value, it should be noted that this is why hashgraph being patent may become a liability for its users. Thus, the user may switch to non-patent technology to make the whole process easier for themselves.

Bitcoins require heavy mining. On the other hand, a hashgraph requires no ming at all. The user may not be able to mine it. Thus, the only option they are left with is to buy it. The hashgraph management plans to introduce proof of stake and mining procedures in the market. However, not much has been done yet, making it somewhat uncomfortable to use for the users.

Blockchain is a process for recording data that makes it troublesome or difficult to change, hack, or cheat the framework. A blockchain is an advanced record of exchanges that are copied and dispersed across the whole organization of PC frameworks on the blockchain. Each square in the chain contains various exchanges, and each time another exchange happens on the blockchain, a record of that exchange is added to each member’s record. The decentralized information base oversaw by numerous members is known as Distributed Ledger Technology (DLT). Blockchain is a DLT where exchanges are recorded with a changeless cryptographic mark called a hash.

This implies on the off chance that one square in one chain was transformed, it would be promptly obvious it had been altered. To ruin a blockchain framework, they would need to change each square in the chain across every one of the appropriated renditions of the chain. Blockchains, for example, Bitcoin and Ethereum, are continually and persistently developing as squares are being added to the chain, which essentially adds to the security of the record. Thus, Is blockchain the future? This is the elephant of the room these days. Let’s learn the answer to this question now and become a blockchain engineer today.

Advantages and disadvantages of Blockchain

Decentralization is the biggest advantage that Blockchain has over its competitors. When we talk about blockchain being decentralized, it does not require any intermediaries. Once the transaction takes place due to no hindrance and involvement of third parties, the process becomes much smoother, reducing its transaction validation times.

Blockchain has a properly distributed network. That means it does not belong to one place or one individual. Rather you can have multiple copies of the same thing every time and any time you want the relevant information. Also, this characteristic makes it resistant and resilient to any type of failure since a node fails does not imply generalized failures in the network. Similarly, there is one more thing to note here. Since the network distribution is authentic and stronger, it makes it the platform practically with no errors. Malware and malicious information within the blockchain cannot exist and becomes impossible to be present at the blockchain.

As there is no intermediary system at blockchain, it makes it convenient for the users to have a person-to-person transaction. Since no intermediary cost is involved, the blockchain is cheaper than its competitors.

The block approach of the blockchain makes it harder and difficult for the users to use it. As two blocks can be mined together, in that case, the miner would have to make a choice. The miner will work at one block, leaving the other. One of them gets discarded, resulting in a less efficient network. The lack of efficiency of blockchain would make it difficult for the user to work on it. Thus, the miner may lookout for blockchain alternatives

As a user, you may find blockchain cheap. It has no intermediary cost and no centralization process, making it cheap for the customer. However, big companies have to pay handsome costs to install it. Thus, it is still not accessible to many of its potential users. The capital expenditure discourages big companies from using blockchain, and they look out for the competitors who do not have high initial investments.

Blockchain does not have a very efficient and up-to-date storage system. Here the hashgraph vs blockchain debate becomes highly active. As the users grow, the number of transactions and operations will also grow. This, in return, requires a space in the miner’s computer. Blockchain needs to recognize this need and work on its storage capacity. The lack of good storage capacity makes people choose hashgraph over the blockchain.

As blockchain is adopted widely, many companies and people will choose it. Since it has no intermediaries involved, it would leave the employees who work in this sector jobless. As it grows wider, the role of intermediaries becomes questionable. Thus, making the whole sector obsolete. It can be a big drawback for the economy blockchain will operate in.

Blockchain VS Hashgraph: Best Use Cases

Is Hashgraph the future?

We often get this question if hashgraph will dominate the market or not. Well, the answer is flaccid yes. In our opinion, hashgraph is the ultimate future in cryptocurrency. But why do we say this? Well, hashgraph is a new emergent technology with equipped features. It uses a vast programming language like Java. It is more readily accessible.

Furthermore, it is 100 per cent efficient and provides immense efficiency of work. The speed at which hashgraph conduct transactions is phenomenal. It can do up to 500,000 transactions per second. Thus, we can only imagine how beneficial it would be for the crypto world. A more fair technology with more secure and reliable features would always be the best blockchain alternative. Nevertheless, to say, it is the future of the crypto world.

Blockchain VS Hashgraph: Who is the winner?

To conclude, we can say that hashgraph has a lot of benefits. It is efficient, and it has high speed and low operating costs. It can be a perfect platform for the user. However, it may be advanced, and you may have to buy a patent before using it. Furthermore, you need to keep in mind that there isn’t much room for mining at hashgraph. This is a big disadvantage that makes it difficult for many users to work on it.

On the other hand, it would be low in cost and decentralized if you use blockchain. The nature of blockchain, its technological advancement, and its quick way of transaction may make it the first choice for the user. However, it may have storage issues, and if you are a big company, you may have to incur heavy expenses to buy it.

Both of these DLT’s have their disadvantages and advantages. To better understand the hashgraph vs blockchain debate and choose from the two, one should understand their own needs and priorities. If the work needs to speed, one should invest the time and money in a hashgraph. While on the other hand, if an individual chooses to have a better distribution network, they should go for blockchain. We strongly recommend understanding your choice and operating accordingly.

Hashgraph Vs Blockchain: A Quick Comparison with Pros & Cons