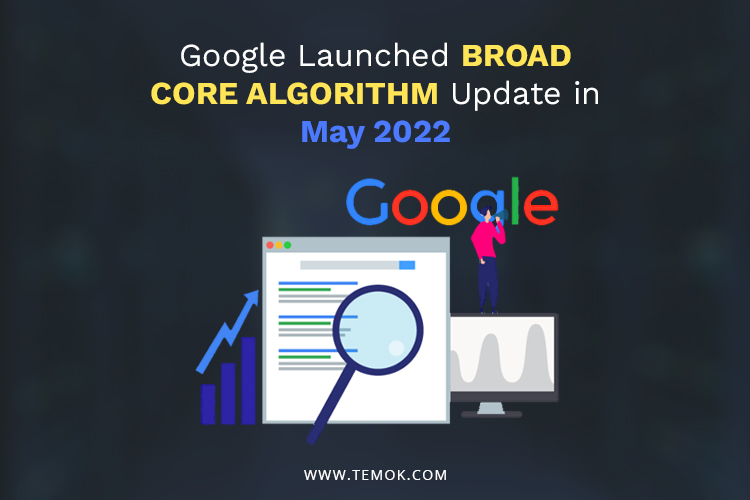 Many times a year, we make considerable changes to our overall ranking processes, which are called core updates. Core updates are designed to improve the overall relevancy of our search results and make them more useful and helpful for everyone. Core updates may produce some noticeable changes to check how websites perform.  When Google announced a broad core algorithm update, many SEO experts find themselves asking what exactly changed.

What Is A Google Broad Core Algorithm Update?

A broad core algorithm update is a change to Google’s “core,” or overall, search ranking algorithm and systems. Google’s core algorithm is a collection of algorithms that interpret signals from webpages (e.g., keywords, links, etc.), to rank the content. Every year, Google makes changes in algorithms. Many of the updates are named Penguin, Panda, Pigeon, and Fred and they are implemented to address specific faults or issues in Google’s algorithms.

On May 25, 2022, Google announced the implementation of a new update to the core search engine algorithm. Such an update is announced many times a year and the last update took place in November 2021.

What Might Be The Results OF The Google Core Algorithm Update?

The core purpose of algorithm updates is to make search results better according to the needs of users. They can cause the page position to alter, both up and down.

But we should keep in mind that when an algorithm is implemented, such fluctuations are normal and they can stabilize. Often, a patch comes a few weeks after the update, so there’s still hope for those whose pages have low ranking.

What Can You Do To Reduce The Position Changes After The Update?

In 2019, Google released guidance and information about updates, and they have not changed since then. This proves that the changes are going in the same direction. So, to make your website better in accordance with them, you will not face unnecessary fluctuations.

What Google says about the updates:

It might seem that these guidelines are not very unique.

Experience tells that, first of all, you should not overreact and implement changes immediately after seeing the charts down. After updating, give some time for the algorithm to settle and the temperature in the SERPs to drop a bit. If the SEO process is carried out systematically, according to Google’s guidelines and by the principles of safe positioning, there may be fewer causes to worry about.

How To Recover From A Broad Core Algorithm Update

Across industries, Broad core algorithm updates impacted the rankings of many websites. Though medical sites got a lot of notice, especially around the August 2018 Core Update, Google’s broad core algorithm updates affected more than health-related sites. When Google updates its algorithm, there are some winners and some losers. If one website’s ranking goes up, the other website goes low. SEO is, and always will be, a zero-sum game.

For a high ranking, Google’s advice is that deliver high-quality content. While this message is frustrating to anyone and everyone involved with SEO looking for actual insights, Google has provided many ideas and guidance over the years about how to create high-quality websites and content. The key is to create consistently great and high-quality content over time. If you do that, your rankings will go up and improve.

What To Do If Rankings are Down After Updates?

If rankings are down after a core update – now what?

Your next step is to collect intel (useful information related to interest) on the pages that are ranking where your website used to be. Conduct a SERP analysis to find positive connections or links between pages ranking higher for queries where your website is now lower. Do not try to overanalyze the technical details, such as how fast each page loads or what their core web has important scores.

When you search any query, Google aims is to provide you with the best answers. Relevance is the one ranking factor that will always win out over all other factors. Have a look at your content once it is relevant according to the core algorithm update. You will have an idea of what more improvements do you need?

When someone enters a search query in Google to find anything he is searching for, the search engine tries its best efforts to return relevant, unique, and high-quality results about what he wants. It is not magic, but 200+ SEO factors are considered to finalize the most relevant web page.  Even if you reach at top 1 position, don’t stop improving your website. Because the website that is at number two will also not stop improving. Because everyone wants to rank his website at the top in search results. It’s just the reality of what a core update is. Here, you can further know what is Google Page Rank and how to increase it? It will help you a lot to get a high rank in search results.