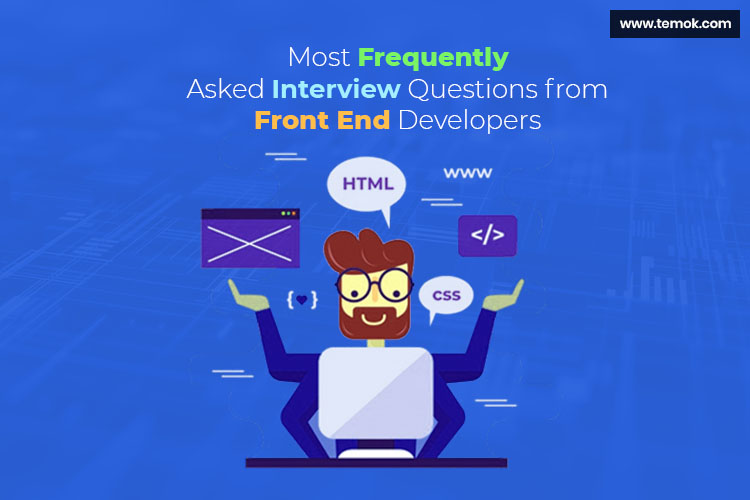 Read out the whole article to get an idea of what kind of frontend developer interview questions the interviewer is more likely to ask.

What you think are the fundamental skills Front end developer must have?

An effective front-end developer should have experience in the following languages:

How you ensure that your web design is user-friendly?

A front-end developer should talk about working together with user experienced designers to conceptualize and design a webpage that promotes a user-oriented experience, you can test your website with a sample of real customers to guarantee optimal design and promising the web page is optimized for mobile devices also.

A clear is used when you do not require an element to twist another element, for example, float.

How do you make the structure of CSS and JavaScript easier to understand for other developers?

Front end developers have to work on the code that was previously formed by employees or function as team part. Following are some of the practices that a front-end developer should adopt to make their code understandable for other employees and team members.

All of the above-mentioned practices would help the fronded developers to make their code more readable and understandable.

What do you know about CSS float?

Float is used when you required to keep your web page element pushed to the left or right and make all other elements cover around it.

What is the main difference between Prototypal and Class inheritance?

In JavaScript, inheritance is different from a lot of other development languages. In JavaScript the object system based on a prototype, not the class. Objects are only a collection of value pairs and name. As far as the inheritance is a concern, there is only one construct JavaScript: objects. Each object has a private property that comprises a link to other object known as the prototype of that object.

What is CSS Rule?

CSS rules are applied by the web browsers to a file to affect the way it is displayed. A CSS rule is formed from:

Syntactically Awesome Stylesheets also known as Sass is a CSS preprocessor that elegance and adds power to the basic language. It lets you use nested rules, variables, inline imports, mixins, etc. the syntax should be compatible with CSS. Sass supports to organized the large stylesheets, and keep the small stylesheets up and running.

The CSS preprocessor is also a scripting language that widens CSS by permitting the developers to use one language to write code and then accumulate it in the CSS.

What’s the difference between “normalizing” and “resetting” CSS? Which one you would choose?

It is a nice idea to select resetting when you have a very unconventional or customized website design that I want to do my own designing, there is no need for any default styling to be well-maintained.

What is the difference between div and span?

For bonus points, it is illegal to put a block element in an inline element, and though div can have a p tag, and a p tag can have a width, for span, it is not possible to have a p or div tag inside.

ReactJS is an open-source front-end JavaScript library that is primarily used for creating user interfaces specifically for one-page applications. It is also used for managing the view layer for mobile and web apps. React was formed by a software engineer named Jordan Walke, who worked for Facebook. In 2011, ReactJS was organized on the newsfeed of Facebook and in 2012, on Instagram.

What are the benefits of REST web services?

Following are some of the benefits of REST web services:

What Is Load Balancing?

Load balancing is a very easy method for allocating capacities across numerous clusters or machines. The most simple and common algorithm of load balancing is called Round Robin. In this type of load balancing the request is divided in circular order ensuring all machines get an equal number of requests and no single machine is overloaded or underloaded.

What is meant by SOLID? Explain its principles?

S.O.L.I.D stands for the first five principles of the object-oriented design by Robert C. Martin.

Name some basic elements of design

What is user-centred design?

User-centred design requires that designers use a combination of investigative (interviews and surveys) and generative (such as brainstorming) ways and instruments to build an understanding of user requirements.

ClickJacking is a security attack in which the user fools to click on something while they think they are clicking on something else. The attack is most happened by the HTML frames.

Tell me when and Why should I Use Webpack?

While making a complex Front-End application with a lot of non-code static possessions, for example, fonts, images, CSS, etc, then yes, you should use Webpack as it a lot of great benefits.

If your application is very small, and do not have a lot of static resources and you just require to build one file of JavaScript to assist the customers, then Webpack should be more overhead than required.

Why should we use jQuery?

jQuery is a good option to choose because of the enormous benefits it holds.

Tell me some benefits of Coffee Script over JavaScript?

Some of the major benefits of coffee Script over JavaScript are as follow:

Explain how variables differ in CoffeeScript than JavaScript?

Why HTML DOCTYPE is important?

DOCTYPE is like an instruction to web browser concerning in which markup language version the page is written. The declaration of DOCTYPE should be the first thing in a document of HTML, before <html> tag. The declaration of doctype points to a Document Type Definition. It offers rules for the markup language, so it allows the browser to understand the content properly.

Tell me about a Callback Function?

We can read JavaScript line by line. It can also result in a successive code line being performed before an earlier code line. A callback function prevents this situation since it is not called until the preceding code line has completely performed.

Why should we suggest JavaScript Or External CSS Versus Inline?

JavaScript or Inline CSS has a bad influence on the performance of the website.

When you use inline scripts, your HTML code will weigh higher, while external scripts decrease the size of HTML file that helps to fast webpage interpretation.

The code of HTML will not be cached on inline scripts. In other words, external needs, for example, JavaScript and CSS files, would be cached by the web browser visitor. Therefore, it decreases requests of https whenever the user clicks via web pages.

It is also difficult to maintain JavaScript and Inline CSS code. Where it is more preferable to use code in one central location rather than changing the same code snippets spread all the files on a website.

Tell me about Cors and how does it work?

Cross-origin resource sharing (CORS) lets numerous resources (for example, JavaScript, fonts, etc.) on a web page to be demanded from another domain name from which resource initiated. It is said to be an instrument supported in HTML5 that controls the access of XMLHttpRequest to a different domain.

New HTTP headers are also added by CORS that offers access to allowed domains. For HTTP approaches except GET (or POST with some types of MIME), the requirement orders that browsers should use HTTP OPTIONS request header to petition a list of supported approaches from the server. A real request can be submitted. Servers can inform customers whether “credentials” (including HTTP and Cookies Verification data) must be shown with requests.

Why We Use the W3C standard code?

The goals of the W3C Standard Code are to guarantee cross-platform compatibility and compact sizes of file. These standards focus to separate “formatting ” from “content ” by applying CSS. It makes development and maintenance easier.

How to optimize the page through front end technology or code?

Following are some of the best practices of front-end technology that allows you to optimize the web page.

What is the difference between Block, Inline, Box-sizing and Inline-block?

Tell Me What Do You Know What Is A Closure?

Closures are usually functions, expressions that can function with a set of variables within a specific context. To make it easier, inner functions concerning the local variables of outer function generate closures.

On a <script> tag, what are async and defer attributes?

If no attribute is present, the script is synchronously downloaded and executed and will stop analyzing the document until it has done execution of the (default behaviour). Scripts are executed and downloaded in the same order they come across.

The script is downloaded by the defer attribute whereas the file is still analyzing and waits until the file has done parsing before execution, equals to executing in a DOMContentLoaded event auditor. The scripts of deferring will be executed in order.

The script is downloaded in the async attribute during document parsing but the parser will pause for script execution before it has completely done parsing. The async scripts will not automatically execute in order.

What is JavaScript Scope?

In JavaScript, every function has its own scope. The scope is said to be a variables collection and also the principles of how to access the variables by name. the scoped variables of the functions can only access by the function’s code.

Within the same scope, each variable name should be unique. We can also nest one scope inside another scope. In this case, the code of the innermost scope has access to the variables from another scope.

If Node.js is single-threaded, how it manages the concurrency?

Node offers one thread to programmers that can allow them to write the code easily without any bottleneck. Node inside uses numerous POSIX threads for numerous input and output operations, for example, Network calls, DNS, File, etc.

Once Node gets input and output request it uses or makes a thread to achieve that input and output operation and when the operation is completed, it shoves the outcome to the event queue. In doing so, the event loop executed and checks the queue and if the Node’s execution stack is empty formerly it adds the outcome of the queue to execute the stack. In this way, the concurrency is managed in the Node. S, it can be said that the A front-end developer should have good experience in HTML, CSS and JQuery. It is important for a frond end developer to know about OPP and PHP. Web pages should be conceptualized based on user experience. Front-end developer should discuss the use of code organization and comment. The CoffeeScript allows you to express program with a shorter code than JavaScrip.