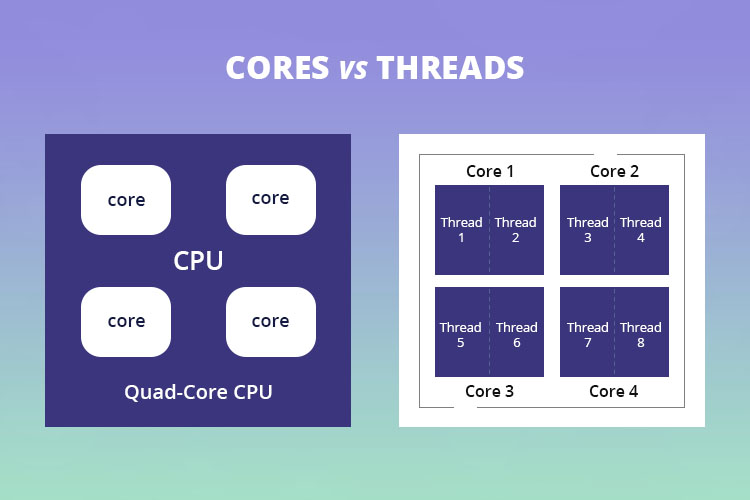 There has been a lot of confusion over what is the difference between cores and threads. Before stepping into the CPU Cores Vs Threads, you need to understand what is a single-core, multicore, thread, multithreading and why we need them. Many computer enthusiasts want to understand what is more important for a powerful processor, number of cores, or threads. This article aims to shed some light on Single thread vs multithread, single-core vs multicore, and threats vs cores.

First, we need to clarify the difference between a single-core CPU and a multicore processer? Simply put, a single-core CPU will only be able to process one program at a time. However, when you run multiple programs simultaneously, then a single-core processor will divide all programs into small pieces and concurrently execute with time slicing, as you can view in the picture given below.

A CPU performance will depend upon the number of cores on the machine and the speed at which the individual cores can execute instructions. Thus, if your website is loading slow and you have a single-core CPU, it may be worth purchasing a multicore processor dedicated server or upgrading your hosting plan. Nowadays, this type of processor is rarely used because we need high computing power to solve our problems within the shortest time period.

Unlike single-core processing, it is a way in which computing tasks are divided into sub-parts, and a multicore processor (multiple CPU cores) execute each sub-task simultaneously, as you can see in the picture given below:

It is also known as parallel execution because all of the sub-tasks are executing in parallel, and it is how many tasks can be processed at the same time. All modern processors used for commercial purposes must have multicore processors to complete the tasks within a shorter time.

Thread is a single sequential flow of control in a program that allows multiple activities within a single process. However, single-threaded processes are based on the execution of programs (or instructions) in a single sequence. In simple words, a single thread is like one command that runs at a time.

Most processor manufacturers use the Simultaneous multithreading (SMT) technique to make sure a single processer can run multiple threads. Multithreading is similar to multitasking in which multiple threads are executed at a time, and a multithread ability manages numerous requests by the same user without opening multiple copies of programs running on the computer.

Kernel-level threads are managed by the operating system directly, and there is no thread management code in the application area. Any application can be planned multithreaded, and the kernel does its scheduling on a thread basis. As compared to the user level threads, these threads are slower to create and manage.

The question on which is more effective – threads vs cores – is determined by measuring CPU performance. You can test both techniques on your own by running the same program (the one that uses both threads and cores) on each type of CPU that you have in your machine. Of course, the programs that use both methods need to share the CPU resources. If you have a desktop CPU and a laptop, you may find that the laptop’s CPU will perform better than the desktop’s CPU because of its larger number of cores. However, when testing a custom application on a dual-core CPU, you will observe performance differences between the two machines.

If you plan to buy your dedicated machine soon, you might want to consider the trade-offs between threads and cores or threads. Of course, you would like to get something more efficient for the amount of data and website traffic you plan to host on a dedicated server.

You might find that an application that utilizes large numbers of cores can simultaneously run multiple tasks without experiencing any form of hang-ups or delays. But suppose the system being used is for very simple applications or single-threaded applications. In that case, it is advisable that you opt for a simpler, lower-end hardware component for better results.

Cores vs Threads – What are the key differences?