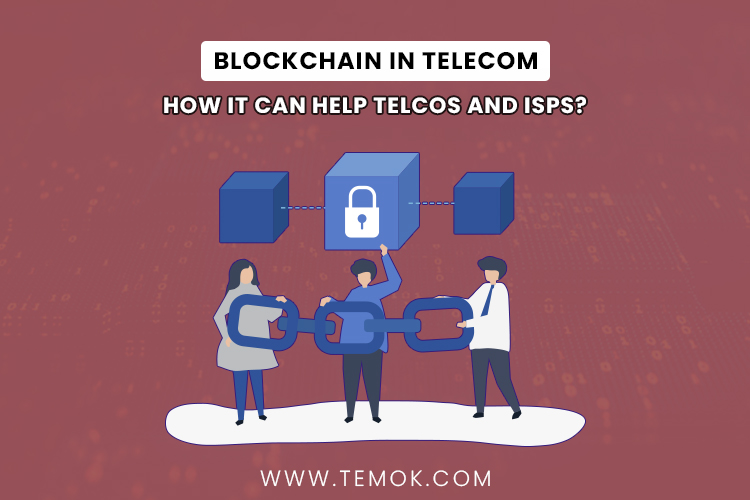 One of the most talked-about and hyped technologies right now is Blockchain. With the rapid development of use cases, proofs-of-concept, and fully-fledged enterprises built on blockchain technology, there aren’t many industries that shouldn’t be both excited and concerned about its potential. The technology has the potential to uplift business patterns in a broad range of sectors, including telecoms, while also improving efficiency and transparency. This blog will further discuss Blockchain in Telecom and how it can help Telcos and ISPs.

Blockchain is a decentralized digital ledger that records transactions across many computers. It is the technology that powers cryptocurrencies like Bitcoin. It was initially developed as the core technology behind the cryptocurrency Bitcoin, but many other industries and organizations have since adopted it. This technology can potentially disrupt many industries, including telco and ISP, finance and banking, the Internet of things (IoT), and government sectors.

How Does Blockchain Work?

Those transactions show the direction of an asset that can be real (a product) or supernatural (intellectual). The data block can record the information of your choice: who, what, when, where, how much, and even in any condition.

Each block is connected to the ones before and after it

These blocks form a data chain as an asset moves from place to place or requests change hands. The blocks confirm the exact time and series of transactions. The blocks link securely to stop any block from being changed or inserted between two existing blocks.

The transactions are blocked together in an irreversible chain

Each other block supports the verification of the previous block and the whole blockchain. It causes the blockchain to tamper-evident, having the key strength of immutability. It removes the chance of tampering by a hostile — and creates a ledger of transactions you and other network staff can trust.

Use-Cases of Blockchain in Telecom

Blockchain is emerging as a ground-breaking technology to handle all the problems plaguing the telecom sector, ushering in a new era of efficiency, transparency, and security. This technology permanently changes telecom since it can fully automate financial settlement, fraud protection, and KYC procedures for client onboarding. Let’s look at some of its applications in the telecom sector.

Since intermediaries manage roaming partner settlements, which take around two months to resolve, roaming is one of the key challenges, as we have indicated. Additionally, this procedure results in human mistakes, fraud, a lack of transparency, and other problems.

The capabilities of smart contracts may be used to automate this complicated operation. By removing third-party intermediaries and automating SLA contracts through tamper-proof provable payments and real-time changes to the end users, agreements on the blockchain network can secure the resolution between the participating participants.

If you’ve ever undergone the MNP procedure, you must know how drawn-out and time-consuming it is. High processing times are caused mainly by data inconsistencies amongst operators and the need for frequent updates from the central database.

Blockchain can simplify this complex process by offering a single authoritative source where all network operators can assess and respond to requests for Mobile Number Portability. Single-point failure will be eliminated thanks to the distributed ledger since all service providers will have access to the same data. MNP may be completed nearly instantly rather than taking days.

Managing Your Identity and Preventing Fraud

Another significant feature of the telecom sector is identity management and fraud protection since various third-party agents handle the submission of identification papers, increasing the likelihood of abuse and leaks. Blockchain can solve these problems by providing decentralized storage where document owners retain complete control. In addition to lowering forgery, its immutability will also regulate the submission of forged papers.

Distributed ledgers can use extensive databases and storage systems in the telecom sector, solving several problems.

Benefits of a Blockchain-Based Telecom System

The blockchain-based telecom system offers several benefits in a world where telecommunication is quickly becoming necessary.

How Can Telcos and ISPs Use Blockchain?

Blockchain is a type of distributed ledger technology that can be used across industries.

Telcos and ISPs (internet service providers) can use Blockchain to secure their networks, manage network traffic, and reduce the amount of data they need to store.

Telcos and ISPs can use Blockchain to:

Telcos and ISPs can use Blockchain to offer new services to their customers. For example, they can use it for billing, content distribution, data storage, and privacy protection. With this technology, telecommunications companies can create new ways of providing services tailored to their end users.

In a typical shared internet service, an ISP distributes a static bandwidth resource pool to several clients in the same locality. When more people are trying to access the same resource, the users’ internet speed fluctuates. Peak hours are when the situation is most bothersome. The user experience will be negatively impacted by the numerous clients using the constrained bandwidth at once. When such instances occur, the ISP may be held accountable because the consumers contend that the ISP violates the Service Level Agreement by providing lower internet speeds than those that the ISP advertised. The challenge for the ISP may be resolved by expanding the bandwidth resource pool. However, when peak hours are past, the extra bandwidth is worthless leading to over-allocation. In the form of three use cases:

We suggest using blockchain with SDN to enable flexible network bandwidth control for the ISP.

Establishing a data storage facility beside the ISP would be the second innovation. Every file on every website needs to be kept someplace, usually in warehouses stuffed with servers in the US and other countries. The internet doesn’t just float around in cyberspace.

But once more, technology has developed to the point where you can use affordable devices called Skyminers to store data that you can retrieve from any location in the world. Launch ISP would use the revenues from the sale of that storage space to reduce the cost of internet access for network customers.

Users may eventually be able to sell any unused monthly data, significantly lowering their internet costs. In collaboration with a business named Skycoin, Launch would employ blockchain technology to control data securely.

Here is a brief overview of blockchain protocols and how you can use them to improve telco/ISP applications.

They are open-source platforms, meaning anyone can use them to build their dApps. They are decentralized in nature, meaning no one entity controls them or dictates what transactions take place on them. The only way to access these blockchains is through a peer-to-peer network of computers connected to the Internet. Anyone who wants access must pay a fee to do so. This fee goes toward the maintenance costs of running the network and ensuring everyone has equal access to it at all times.

They are similar to public ones, except they are not open source; instead, they are controlled by a single entity that owns all data stored (such as Bitcoin). Private blockchains can be used by anyone who trusts their owner enough to agree with them.

Using blockchain protocols in your telco/ISP application allows you to take advantage of all the benefits this technology offers without worrying about interoperability issues between different systems and platforms.

In telecom/ISP applications, blockchain technology can be used to keep track of user data—such as how long someone has been online when they called a particular number or whom they called—and then store that information in a way that’s easy to share with other users who need it. The technology is used to power applications critical to service providers’ operations and business models, including identity authentication, credit and payment processing, supply chain management, and more.

For example, a Telco could use Blockchain to track the location of each device connected to its network. It would allow it to know whether or not a given device was in an area it wanted to keep free from interference from other devices.

The same concept could be applied at an ISP level. The consumer could connect their phone using Bluetooth or Wi-Fi. Still, they could be vulnerable to hackers stealing their personal information using a public Wi-Fi hotspot with no encryption enabled. An ISP with access to blockchain technology could check each device’s location before allowing it on the network and ensure they are only connecting when they are in areas where the user has authorized them.

Conclusion: The Future of Telecom is Here

The telecom industry is undergoing many changes, but the most important is the move toward cloud computing and its impact on technology. Cloud computing provides companies with access to a wide range of resources efficiently, so they can now focus on what they do best: customer service, product development, and financial management.

With the advent of 5G, you can stream live sports on your phone without buffering. You can browse Google without waiting for pages to load and talk to anyone worldwide without dialing. Other well-known telecom sectors also use blockchain to enable micropayments for music, mobile games, and other value-added services.

The future of telecom is here, and it will change everything we know about communication. To become a blockchain engineer, you can take an ultimate guide from here.