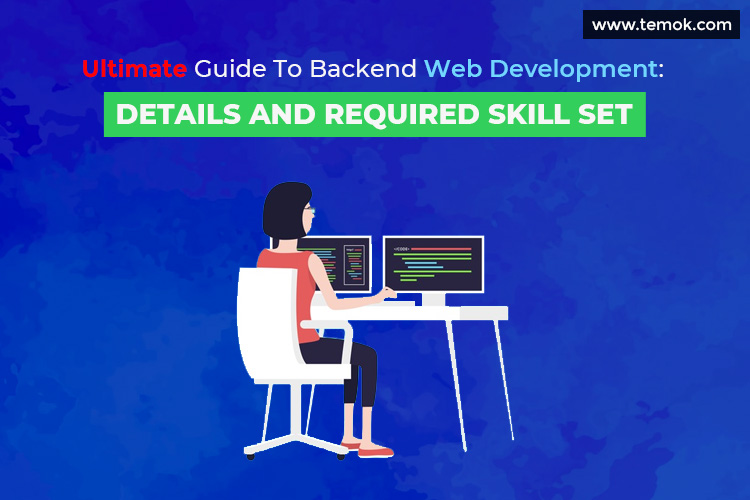 Web development is based on Frontend and Backend development, both are necessary for any functional website. The frontend is based on styling and interacts with users whereas the backend works behind the scenes and interact with databases.

There are several languages and tools are used by developers to create an effective webpage, the frontend is mostly developed using HTML, CSS, Bootstrap and JavaScript, etc. Frontend developers use different frameworks to create eye-catching user interfaces and Backend developers use different programming languages like PHP, Ruby, Python, C#, Java with backend frameworks to create an application that provides all the required functionality to the users and also deals with Databases.

In this article, you will learn how you can get into back end development, required skill set, and all the necessary details.

What is the Backend Development?

Frontend web development involves all that any user sees on his browser when he opens a particular URL. The front end is mostly known as a static environment with only HTML/CSS, when a user opens a website, a host server will respond to the user with those HTML and CSS files.

A host server is a machine that runs round o’clock without having unscheduled downtimes and free of unnecessary components like a keyboard or mouse. These servers are located in a well-managed environment know as a data warehouse. Programming those server machines in some particular way is called backend development. Users can’t access your backend completely, they can only communicate with your server and perform some actions like login, logout, uploading pictures, signup, etc.

Most of the websites contain a lot of things that anyone can’t see related to the user data management and the website, and this is the main functionality of any backend Development. Backend functionality is developed using different scripting and programming languages like .NET, Python, Ruby, C++, PHP, Java, etc. to create logical applications that deal with data. Simply backend development uses the input data received from the frontend and manages in databases.

Browser side is known as client side (or frontend) and the task related to web server (programming the server for getting any partcular functionality) and databases (Storing, retrieving, delteting or updating data) are known as backend.

Who are Backend Developers?

A backend developer is also known as a programmer who creates different useful business logic for software applications or information systems using any programming language. Most of the components that a developer uses are indirectly accessed by a user input through the frontend of the website or software application. The developer also maintains communication between frontend and databases in an organized manner.

Is frontend development necessary for the backend?

Why is Backend Development necessary?

Consider an example, you have an eye-catching car but it can’t be drive makes it useless. The frontend is attractive but you have to give functionality that was needed to perform work.

What is the basic skill set of any backend developer?

To become a backend developer, you need to learn about the following components:

Every digital machine needs to program in any programming language in order to perform specific tasks. If you want to become a backend developer then start learning any programming or scripting language. These programming or scripting languages are run on the server and also known as server-side languages.
In order to create any server-side application or backend web application, we use .NET (Framework), Python (framework), PHP (frameworks), etc. Moreover, you should select one of the best IDE (Integrated Development Environment) or source code editor for both frontend and backend web development.

If you are interested to choose backend development, start learning the best programming languages in order to become a professional developer.

Every programming language has standard support for Database Management System (DBMS) technology, top programming languages like Python, PHP and JAVA can deal with any DBMS tool. Data is a very important part of backend development, so there are many Database Management Systems such as MySQL, Oracle, SQLServer, MongoDB, etc are used to manage the data.

Every Backend developer must have good knowledge of one of the Database Management System (DBMS) tools. All these DBMS tools are used to handle large amounts of data, they can also use cache for small data related to the individual users.

Nowadays, web API becomes one of the important parts of any Backend web programming language. API (Application Programming Interface) is the piece of pre-written code that can attach to any web-application in order to make successful communication with other applications.
Consider an example, when you login to any website, it gives the option to sign-up with your Google or Facebook account to any website are web APIs. With the help of login API, we don’t need to signup on every website.

You can setup your own servers at home but it is difficult to provide proper hardware, cooling, electricity, dedicated internet connection and many more. It is costly for business startups, so they can easily get the “shared hosting” from hosting providers that is more suitable for freelancers or beginners.

Focus on backend development and improve your skills rather than wasting time on buying, setting up and managing servers at home. Once you have learned professional development skills, you will get bigger projects from running business brands that need VPS or dedicated hosting then you will experience these types of web hosting.

You don’t need to worry about hosting management, all type of hosting is owned and managed by hosting providers. You are going to become a backend developer, not a hosting provider, so focus on learning the management operations of hosting server with the help of user-friendly management tools for monitoring usages, domain emails, file systems, downloading/uploading files with ease and many more.

A version control system allows developers to save history in order to track the changes in the development projects and creates a collaborative environment. Developers can easily work together on code and distinct their development tasks through branches. There are many branches are available in the version control system used to maintain individuality as code changes remain in the specified branch.

Version Control systems make it easier to combine code changes, view history and go back to old versions to use the code.

What are the Main Benefits of Version Control Systems?

There are many advantages of using version control systems including streamlining the project development process, proper code management for multiple projects and keeping the history of all changes made within a code.

All code changes are saved in a repository, if the developers make a mistake, they can easily undo it and able to use error-free code. Another amazing feature that any backend programmer can use is to compare the new code with an old version to resolve their problems. It reduces human errors, so every backend developer should be aware of working with version control systems.

Following are the most widely used version control system:

If you want to become a backend developer, learn all the above mentioned necessary skills and increase your knowledge to get more benefits. First of all, start to learn any programming language, related frameworks, and databases with necessary quires, server knowledge, rest APIs and any version control system.