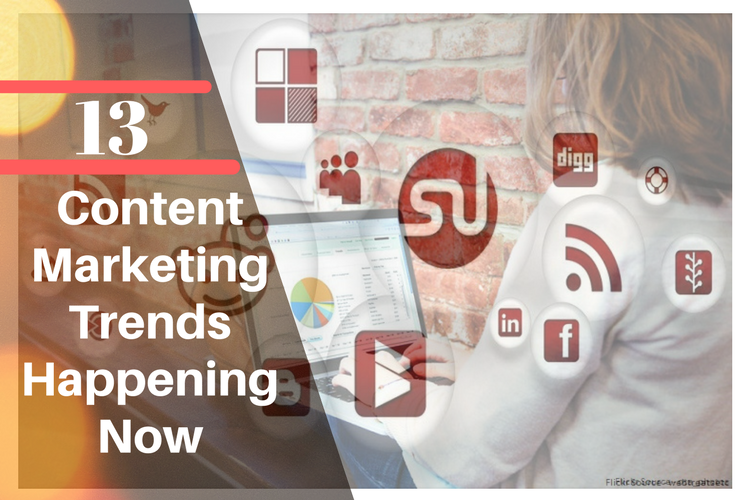 What started with clever landing pages has grown into a huge industry.

There are so many forms of content and so many ways to make it work for you.

While there are some dependable content strategies we can go to every time, there are some trends that are making the industry sit up and pay attention.

What’s happening now and what’s coming next in content marketing?

Over the last decade, magazines and print publications took a severe hit. We expected them to all but die out to be replaced by digital versions of the content. While this has been true to a certain extent, the trend may be starting to reverse.

Companies who traditionally were all online are now offering print publications. Airbnb is printing a magazine with its content for all of the properties listed on the site and other companies like School of Doodle and VFiles have followed suit. Why? Because the amount of content online is overwhelming – a print publication stands out.

Websites and publishers who have the means are starting to skip right over the long and tedious process of building a following. Instead they are simply paying or buying out right publishers who already have the following that the companies would like to have.

CNN recently bought Casey Neistat’s influence by paying him and his team $25 million to join CNN. Along with Casey, CNN will also be getting 6 million followers that fit the exact demographic that CNN is looking to target.

Using funds and buying up influencers and their networks, companies are able to skip the organic, natural growth that can take years to develop. A new content marketing demographic is occurring where large amounts of money change hands in terms of sponsorships, placed advertisements and now brand and ownership changes.

This strategy allows companies to move faster into markets and it opens a new line of potential revenue for the smaller businesses who might work to build up a network in certain demographics on behalf of larger companies or with the intent of selling (or renting) their network to others.

A darker side of the network building and content marketing that is currently happening resembles a sort of media war. Large influencers with networks of millions of extremely dedicated followers will go to the mat fighting the battles the influencer chooses.

This has been seen very visibly in recent political maneuvers in the United States and in businesses as well. Kellogg made a public statement about the company’s belief system when it pulled advertising from Breitbart.com. Breitbart.com fought back with a #dumpkelloggs campaign.

The negative content went viral on Twitter, was spread mightily by faithful Breitbart.com followers, and was picked up by major news outlets. Kellogg doesn’t have the social following that Breitbart.com does and was powerless to fight back in that particular field of battle.

Social media was a great place for companies to develop content and share it with followers. This is becoming less of the case as the social media networks continuously change their algorithms. The changes are making it harder than ever for companies to connect with their audience.

Some companies like BP are starting a strategic abandonment campaign and advertising less on Facebook and more on other social platforms like LinkedIn where there is less change and more predictability. Others have simply stopped or significantly cut down on creating new content for the networks and instead focusing on using their content in other ways.

Email, the long forgotten forefather of modern content marketing, is seeing a resurgence. Companies are realizing the power that a dedicated list of opt-in members can have when it comes to enticing repeat customers and building a dedicated network of loyal brand members.

Email newsletters are being developed as a new growth area by some while others still complain that email is dead. For comparison sake, The New York Times has 12 dedicated newsletter developers. The Washington Post runs and distributes more than 75 separate newsletters. At least one study by CMI/MarketingProfs B2B survey found that email is the top metric when it comes to measuring content marketing success.

When content marketing first became popular, companies jumped into the fray in an effort to claim some territory in the market. Now, as content marketing moves into a more developed timeframe, companies are thinking harder about how they plan to continue using the form of advertising and how they want to do so.

Many companies are formulating and then applying very specific content marketing strategies. Companies have evidence of what has worked and not over time, and now can develop new plans for how they want to proceed in the maturing marketplace.

Native advertising is serving as an entry point for many companies interested in trying content marketing without a tremendous investment of resources. Native marketing opportunities allow companies to pay for newly developed content in areas where it will blend right in with the content of the nonpaid variety.

There are restrictions on what is allowed and what is not in terms of deceptive marketing practices, but a well-written piece article placed among other well-written articles clearly labeled as advertised or a suggested post can easily kick start a content marketing campaign.

There should be a “why” driving your content marketing. Many companies have naturally started their campaigns over the years by focusing heavily on the “what” of the ads and content they are creating. They should now be transitions to a “why.” If you have a specific purpose, the ideas and developments are much more likely to fall in line.

Video. GIFs. Images. Memes. We like to see something and visual storytelling is a new force in the world of content marketing. Remember the mom in the Chewbacca mask? How about the flooding in Houston? If you read about it, you might recall vague memories about it, but if you saw it, watched the videos, heard the laughter or messages of resilience you internalized it emotionally.

Commercials have appealed to us for decades, but now even the least-financed individual can make a video, share moving images, talk us through an experience or make us laugh essentially for free.

Many companies are afraid of Snapchat. The messaging tool is hugely embraced by those under 25 and it has growing acceptance among those slightly older. What used to be quick messages that disappeared has evolved into a platform where relationships are built between individuals and companies who are savvy enough to speak to them in their own language on their own platform. For comparison’s sake, there are now more videos being watched on Snapchat than Facebook.

Facebook started as almost the holy grail of content marketing. The demographics where there. The platform was there. It all came together so smoothly it just made sense to take advantage of it. But investing a great deal of resources in a social network like Facebook is like building a massive home on land that you’re renting for the time being.

Facebook makes some changes and you suddenly don’t have much to show for the investments you’ve made. That doesn’t mean you should abandon Facebook completely. It just means that you need to revisit the site and revise your strategy according to what Facebook can actually provide.

Every year seems to be the new “year of the mobile device”, and every year nobody is wrong. Mobile is spreading and every year it reaches new heights of influence. At a bare minimum, every company should be sure that their content is easily reached and viewed on a mobile device.

For those looking to really develop a content strategy using mobile marketing, opportunities abound. Games, social platforms, Snaps, Tweets, bubbles, battles and Pokémon are all part of the mix and popularity for each comes and goes. Harassing popularity at the right time and with the right content can land major coups in terms of mobile content marketing.

Trends in technology are one component of what is driving the changes in content marketing. Other factors include the sheer volume of digital noise and the desire for companies to build large, dedicated fan bases they can use for their own purposes in both buying, and potentially blocking sales for others. While content marketing is certainly changing, there is one thing that is certain – content marketing isn’t going anywhere.