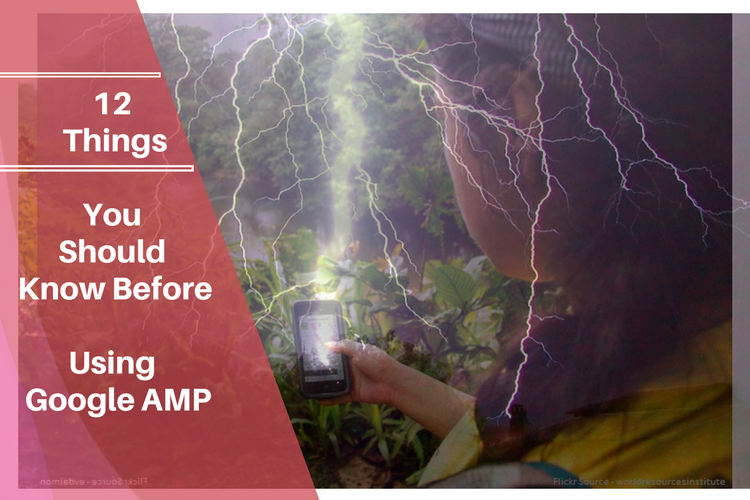 Google believes that mobile devices are most important.

More important than desktops or laptops.

It’s a mobile first world for Google, and that’s a good thing for the rest of us.

Google is working hard to improve the mobile experience.

Google AMP is part of the process.

What is Google AMP?

Google is working hard to improve the mobile experience of website visitors. Google AMP is part of that initiative. AMP stands for Accelerated Mobile Pages. The goal of the project is to provide an open-source platform for publishers and developers to use as they create faster versions of their websites for mobile devices.

In short, Google AMP is a software to make websites load faster on your phone. Google’s goal is to have websites and ads created using the AMP software load almost instantly, satisfying the instant gratification needs of its audience who are always looking for things to be faster.

Websites were created for the computer. You had large processers loading large sites heavy with images and rich with text and information. Then came cell phones. Those same heavy websites didn’t work properly on mobile devices, and when they did work, they worked slowly – often loading so slowly viewers gave up in frustration. When the website did load, the site condensed in a way that the articles weren’t viewable under the strangely placed images and graphics.

Google AMP is designed to alleviate all of these issues. A site designed using Google AMP will be clean, simple and will load easily and quickly. All of this improves the viewer’s experience, and therefore the website’s experience with potential readers or customers.

If you’re used to sites with loads of ads, pictures and graphics, Google AMP sites will look simple by comparison. There will still be images, but they will be placed in a more strategic way on a website that is designed to be simple, easy to navigate and even easier to load and enjoy.

There is a bit of a limit on creativity with Google AMP since the parameters are pretty tight, but while sites won’t stand out as flashy, they will stand out as loading quickly and being very user-friendly.

Google AMP is designed using HTML5 with additional requirements and restrictions included to streamline load speeds. Optimization is done through JavaScript and CSS3 is used to add style and flair to the individual pages. One of the main tenets of AMP is caching.

When a user loads a page, it is the cached version of the webpage that is actually displayed. While the user is checking out the cached version, AMP is requesting the same page from the original server where it will wait as the most recent cache file for the next visitor.

Google AMP is designed to be available for anyone to use. It is an open source software that is free to use. It is available through plug-ins on WordPress for those who already use WordPress for their website or blogs, which makes implementing AMP straightforward for beginners or those who aren’t experts in more detailed coding. AMP is still gaining steam. As it gains in popularity there will be even more tools available to help you implement AMP for your sites.

If your website is used heavily by mobile users, Google AMP is an excellent choice. Putting AMP to work with your mobile-use site will improve your customer experience, which will ideally help your conversion experience. AMP is already being heavily used by news websites and blogs as well as some product pages on sites like eBay.

This is a great way to create a mobile-responsive version of your website that is ideally tailored for what is to come in terms of mobile technology. Just be aware that as you put AMP to work, you may lose some of your customization options for your site.

If you already have a mobile-responsive website, there is not a huge rush to redesign your website for Google AMP unless you want to be ahead of the curve. AMP is still developing and the specific benefits in terms of improved rankings in Google are still not readily available.

This means you still have time before you’ve missed an opportunity. Google is such a major player in the industry, however, you can expect those benefits to come through sooner rather than later, however, if you’ve been thinking your site needs a redesign anyhow.

Google knows this and has effectively blocked pop-ups and interstitials. All ads aren’t banned, but advertisers who are ad-heavy will need to do some brainstorming and streamlining as they move to Google AMP sites.

Google has been known to drop some serious bombs on the SEO efforts of website developers, so many SEO experts are watching Google’s AMP efforts with a bit of a side-eye to see how it will affect SEO rankings. Google representatives have claimed that AMP will not affect page rankings…very much.

It is well known, however, that Google plans to give preferential treatment to AMP versions of websites in search results, but this isn’t exactly a chance in SEO rankings. Google is increasingly mobile-first, and it is reasonable to expect that trend to continue, even in site rankings down the road.

Every new piece of software or coding is bound to have downsides, and AMP is no different. When it was first rolled-out, Google AMP was hard to implement, but plug-ins and other tools have already started to make the process more streamlined. There is hope that WordPress plug-ins in particular will continue to improve and further simplify the AMP experience.

The ongoing concern about AMP is less about implementation and more about creativity. In order to streamline site load times, AMP necessarily limits the JavaScript library, which limits how you can code your AMP pages. AMP pages currently don’t use forms, for example, and many customization features we take for granted in sites today or limited or non-existent in AMP.

The Future of Google AMP

There are skeptics out there who feel that despite Google’s status in the industry, AMP may not catch much traction over time. It can be frustrating for developers who enjoy creativity, and the framework isn’t as simple to use as developers would prefer.

On the other hand, it’s an open-source software and plug-ins are already in development to make the software an easy addition to popular platforms. It certainly doesn’t hurt that there are expectations for SEO rankings in the popular search engine based on AMP adaptation.

Google AMP on Your Sites

Ultimately it will be up to you how you choose to implement Google AMP on your websites. If you already have responsive websites, you may be in the clear for now in terms of a redesign, but Google is pushing hard to improve load speeds even more, and while AMP is not a huge consideration in page ranks and requirements now, it may very well be critically important for your site within a year or so.

It stands to reason that taking time to transition your websites to an AMP version may be time well spent – especially if you work slowly and start with your most popular mobile sites first.

It’s always a trick to know where the next big thing might be and how technology will change and develop moving forward. What we do know is that Google AMP is being pushed hard by Google, and with such a major player in the technology game, we can be certain that AMP will be moving forward with or without you.

12 Things You Should Know Before Using Google AMP