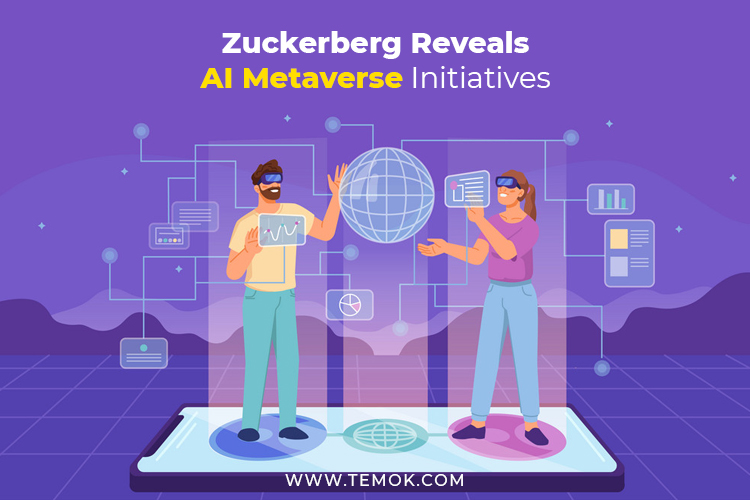 Facebook has been investing in it for the last ten years when it comes to artificial intelligence. It has one of the world’s best AI experts at the head of the table, Yann LeCun. In January, it was announced that it had created a new AI supercomputer, which it hopes to be the fastest in the world when it is finished in mid-2022. In response to revelations made by Facebook whistleblower Frances Haugen, the company renamed itself, Meta in October.

Meta, which used to be called Facebook, is now working on Artificial Intelligence (AI) to make new worlds through speech, improve how people talk to voice assistants, and translate between different languages. Mark Zuckerberg, CEO of Facebook, announced a live-streamed event called “Inside the Lab” on Wednesday. The metaverse, a futuristic concept of virtual settings in which users can work, socialize, and play, was laid out in detail by him. The mobile internet’s heir apparent has been identified as this new technology.

He remarked, “AI is the key to unlocking a lot of these advances.” When users describe a world to Meta, the AI models that Meta is developing allow them to build the surrounding environment as they see fit. He also introduced an AI concept known as Builder Bot in a rehearsed demo. Film: Mark appeared in this video as a 3D avatar on an island, and in it, he provided commands to create beaches, trees, and even a picnic blanket. Zuckerberg conceptualizes this technology will allow you to create rich worlds to explore and share with others using only your voice in the future. However, he did not provide any details about when or how these developments would be made or even describe the Builder Bot itself.

According to Meta’s CEO, the company is focusing on AI research that will allow users to converse with voice assistants more naturally than they already do with AI in the metaverse. Project CAIRaoke is a “completely end-to-end neural model for constructing on device assistants,”

Meta says that the model is used in its video-calling Portal gadget, but it wants to use it in AR and VR devices in the future. During an interview, Meta’s AI Vice President, AI Jerome Pesenti, claimed that until the system could verify that it would not generate foul language, it was restricting the responses of its new CAIRaoke-based assistant.

According to Pesenti, it takes a lot of work to govern these sophisticated language models. Additionally, Meta is looking forward to working on a universal speech translator that will allow users to instantly translate between any two languages they choose to use it in. For its artificial intelligence system, the corporation had previously set to interpret all written languages.

With its market value down by one-third following a disappointing earnings report, the social media giant has made significant investments in its new focus on creating the metaverse and has rebranded itself accordingly. According to the company’s latest financial report, its augmented and virtual reality division, Reality Labs, will have a net loss of USD 10.2 billion in 2021.

Because of its more real-time nature, Pesenti described the metaverse as a “developing work” in which Meta is still trying to figure out the regulations that govern behavior in the metaverse. Additionally, Zuckerberg discussed how meta is ready to use self-supervised learning. AI is given raw data instead of being trained on masses of labeled data to analyze and predict the kinds of interactions in the metaverse.

As the CEO pointed out, Meta is working on egocentric data, which includes viewing the world from the perspective of a single individual. Global cooperation of 13 institutions and laboratories has been formed to work on the largest ever egocentric dataset, named Ego4D, he claimed.

To produce AI systems that are free of bias, Meta aims to expand its free education activities to include more minorities. Recruiter Heidrick and Struggles recently conducted a poll in the United States and Europe, finding that around 80% of data analytics and AI CEOs are men and 65% are white.

After a few years of research and development at Meta’s artificial intelligence labs, they’ve disclosed initiatives that will form the backbone of the metaverse.

It was announced that “BuilderBot” would be presented as “a new tool to promote creativity in the metaverse.” ‘No Language Left Behind,’ a system that translates all written languages, is another technology being developed. Another project being worked on by the tech giant is a ‘Universal Speech Translator,’ which would enable instant translation from one language to another. A new project called ‘CAIRaoke’ aims to improve conversational AI so that humans and chatbots may have more natural conversational exchanges.

According to Pesenti, the TorchRec recommendation library used to customize products like Facebook’s news feed will be made open-source to ensure openness at another event. He claimed that the business would also release a feed ranking prototype to highlight how its algorithms prioritize whatever material it exposes to Instagram users Instagram.